NBA All-Star Weekend Brings Stars Together From All Of Entertainment 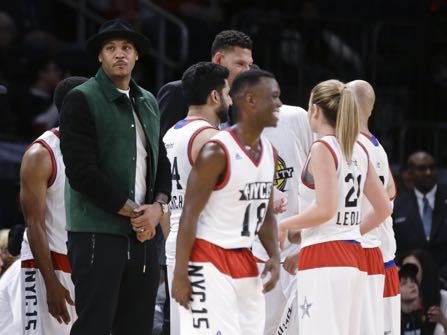 NEW YORK (AP) — It is NBA All-Star weekend, but it seems as if all the stars in the celeb galaxy were taking part in the swanky dinners, posh parties and concerts before Sunday’s big game.

Almost every pocket of New York City, it seemed, offered some kind of starry celebration. Chicago Bulls’ Jimmy Butler was among those taking in the celeb scenery.

“My brothers are with me so I try to spend a lot of time with them. They get to experience my first All-Star with me,” he said before rattling off some of the weekend’s highlights, including an early morning Prince concert in celebration of the Jordan brand’s 30th anniversary: “It was amazing. Come on, it’s Prince, and I had a blast.”

Butler spoke at one of the biggest lures — a West Village luxury townhouse commandeered by Beats by Dre. The headphone and music company set up shop over several floors of the home in celebration of All-Star weekend and Fashion Week so boldface names could get massages, tattoos, food, drinks and, of course, their namesake audio equipment.

Butler was still in awe of the weekend, including his All-Star designation.

“It means the most; it’s really surreal because I’m from a small town, never thought I’d be here. I’ve met so many people, so many good people, including here,” Butler said.

“It’s crazy to be like on the same lineup as Lebron (James) and Melo (Carmelo Anthony) and all of those guys. … They’re all good dudes; they all just want to win.”

On Friday night, Nas and Drake gave a concert that featured Kanye West, while James held court at a dinner thrown at the Italian eatery Carbone by Beats. Farther away, All-Star John Wall had his own dinner at STK with Luc Belaire, where he mingled with guests, including rapper Pusha T and actress Keke Palmer.

On Saturday afternoon, recently retired Derek Jeter gathered his former Yankee teammate C.C. Sabathia, quarterback Russell Wilson, and others to discuss the launch of his after-career venture, the Players Tribune, a digital media company designed to give athletes a platform to tell their own stories; a late night launch party followed with a performance from rapper Common.