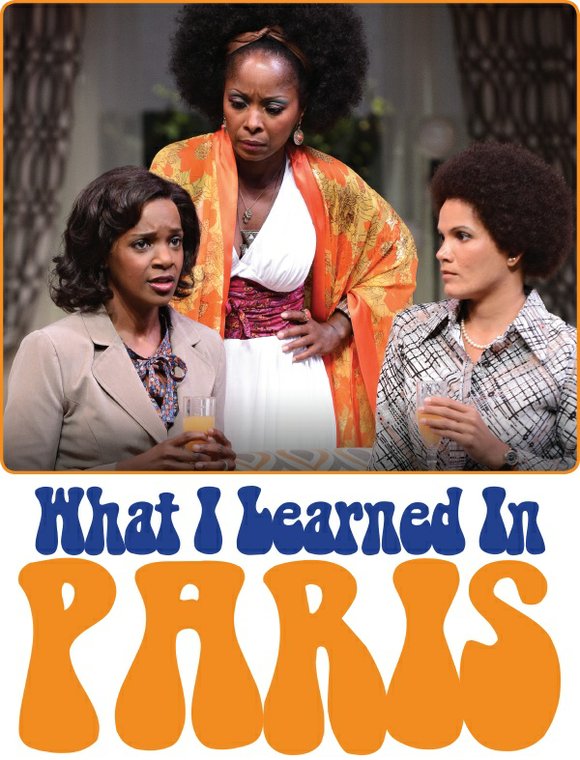 Who/What: The Ensemble Theatre kicks off its spring production, What I Learned in Paris, a romantic comedy by best-selling novelist and author Pearl Cleage and directed by Ensemble Artistic Director Eileen J. Morris.

Old loves rekindle and new love ignites in this funny and delightfully urban love story. Set against the colorful and passionate times of the 1970's this sparkling new romantic comedy takes audiences back to when mini-skirts and bell bottoms rocked to the tune of Stevie Wonder’s 1973 hit, “Livin’ for the City; women’s liberation raised the conscience of the nation; and Atlanta made history by electing Maynard Jackson as its first Black Mayor.

Featured cast members include: Yunina Barbour-Payne, making her debut on The Ensemble Theatre stage; Kendrick “KayB” Bown, just seen in Fly; Cynthia Brown Garcia, who was in The Ensemble’s premiere of the Thomas Meloncon play Christmas with Great Aunt; Detria Ward, who won the 2013 Houston Press Best Actress for her performance in The Ensemble’s production of Pearl Cleage’sThe Nacirema Society; and Mirron Willis, who most recently performed as Malcolm X in The Meeting.

Where: The Ensemble Theatre

The Ensemble Theatre's 2014-2015 Season is sponsored in part by grants from the City of Houston through the Houston Arts Alliance, Texas Commission on the Arts, and the National Endowment for the Arts. United Airlines is the official airline sponsor for The Ensemble Theatre. What I Learned in Paris is generously underwritten by Chevron.

The Ensemble Theatre was founded in 1976 by the late George Hawkins to preserve African American artistic expression and to enlighten, entertain, and enrich a diverse community. Thirty-eight years later, the theatre has evolved from a touring company operating from the trunk of Mr. Hawkins’ car to being one of Houston’s finest historical cultural institutions. The Ensemble is one of a few professional theatres in the region dedicated to the production of works portraying the African American experience. The oldest and largest professional African American theatre in the Southwest, it holds the distinction of being one of the nation’s largest African American theatres owning and operating its facility and producing in-house. Board President Emeritus Audrey Lawson led the capital campaign for The Ensemble’s $4.5 million building renovations that concluded in 1997. The Ensemble Theatre has fulfilled and surpassed the vision of its founder and continues to expand and create innovative programs to bring African American theatre to myriad audiences.