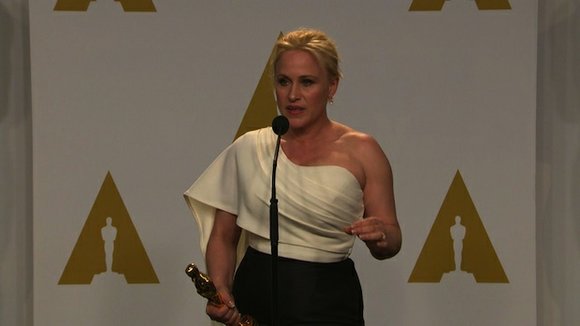 "It's our time to have wage equality once and for all, and equal rights for women in the United States of America," said Arquette, sparking enthusiastic applause and cheers from many in the audience. Television viewers saw actresses Meryl Streep and Jennifer Lopez cheering her comments.

Arquette's pay for appearing in the movie "Boyhood," for which she won the best supporting actress award, has not been revealed publicly. But some of the internal documents revealed in the recent hack of Sony Pictures indicate that there is a page gap even in the higher ends of Hollywood.

One of the widely-reported hacked e-mails indicated that three male stars of the movie "American Hustle" -- Christian Bale, Jeremy Renner and Bradley Cooper -- were each taking home 9% of the movie's profits, while Amy Adams was only receiving 7% and Jennifer Lawrence, who had just won a best actress Oscar and was the star of the box office hit Hunger Games series, was getting only 5%.

Another report citing the hacked e-mails said that actress Charlize Theron was able to negotiate a large raise to more than $10 million after she discovered that her co-star Chris Hemsworth was to be paid significantly more than she was for the film "The Huntsman," which is due out next year.

The most recent Forbes magazine lists of best paid actors and actresses showed that only two actresses would have made the top 10 best paid actors list: Sandra Bullock, who made an estimated $51 million, and Lawrence, with $34 million.

Robert Downey Jr. was number one on the list at $75 million, while No. 2 Dwayne "The Rock" Johnson also would have topped Bullock's pay at $52 million. Lawrence would have been No. 10 if the two lists were combined, once again coming in behind Bale.

The gender pay gap isn't something that affects only the top dollar actors and actresses in Hollywood. A report by the World Economic Forum estimated that U.S. women earn about 66% of what their male counterparts earn.