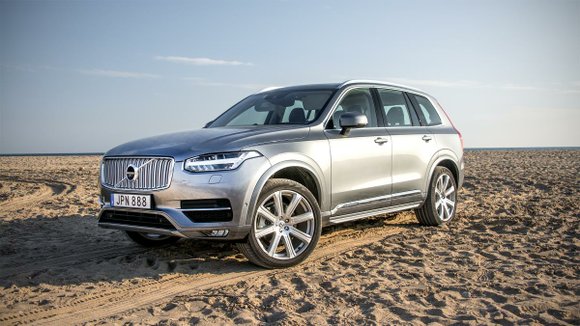 VOLVO'S FLAGSHIP SUV REDESIGNED WITH THE AMERICAN MARKET IN MIND

Easily Volvo's most anticipated premiere of the last few years, the full-size XC90 SUV is headed to dealerships this May sporting an all-new platform, a new design language, a new powertrain that will also be offered in hybrid form and basically new everything else. The seven-seater SUV is the first Volvo vehicle developed independently of the engineering inherited from Volvo's past corporate parent, Ford, and it replaces a model that has been on sale since 2002.

The 2016 Volvo XC90 is first and foremost a reflection of a new design direction for Volvo, underpinned by the company's Scalable Product Architecture (SPA) platform, which will be used on a number of new vehicles. The new SUV is wider, taller and longer than the model it replaces, though it also manages to be lighter. A longer wheelbase than the old model's ensures a better ride, while the interior is more spacious and luxurious, focusing on comfort and premium materials.

At launch, the U.S. XC90 T6 will get a turbocharged and supercharged direct-injected 2.0-liter four-cylinder engine making 316 hp and 295 lb-ft of torque. That Drive-E engine is coupled to an eight-speed automatic transmission driving all four wheels. A more powerful T8 plug-in hybrid model will arrive this fall using the same engine as its gasoline powerplant. But even the T6 model, which we'll see first, will be powerful enough to get the SUV from 0-60 mph in 6.1 seconds. The later T8 plug-in hybrid will produce around 400 hp and will be the cleanest and most powerful premium SUV on the market when it goes on sale, according to Volvo.

The XC90 will be offered only in AWD form in the U.S., with the chassis featuring a new double-wishbone suspension up front with an integral link rear axle. The rear axle will have a transverse leaf spring made of a lightweight material in place of coil springs, and a new electric rack-and-pinion steering system replaces the traditional hydraulic unit. An electronically adjustable air suspension will allow drivers to select from a range of settings, including comfort, eco, dynamic, off-road and individual, controlled by a cylinder-shaped wheel located just behind the console-mounted gear selector. The air suspension will automatically lower the ride height by 10mm at speeds above 62 mph and drop the SUV by 40mm for easier ingress and egress.

As this is still a Volvo, it means that an everything-and-the-kitchen-sink approach has been adopted when it comes to safety: The XC90 gets a vast lineup of safety systems incorporating elements that foreshadow autonomous vehicles. They include automatic braking at intersections, which will apply the brakes when making a left turn at an intersection when the vehicle detects an oncoming car, a new adaptive cruise control system with automatic steering and braking inputs, road edge detection, day-and-night pedestrian and cyclist detection and avoidance, lane-departure warning system, whiplash-protection system and run-off road protection. The latter system is aimed at keeping the XC90 from rolling over when leaving the road and heading into the ditch, using the ABS system to keep the vehicle upright. All these systems are part of Volvo's Vision 2020, an initiative to ensure that no one will be seriously injured or killed in a Volvo by the year 2020.

When it comes to infotainment, Volvo hasn't been asleep at the wheel either, as the XC90 features a new Sensus infotainment system shaped like a giant smartphone or tablet, complete with a home button at the bottom. And just like a phone or tablet, it will allow for the familiar scrolling and waving motions, in addition to pinching and stretching to navigate, even when the driver is wearing gloves. The Sensus control system will also offer a voice-control system and cloud-based applications.

The XC90 will be available in a choice of three trim levels, with the base Momentum starting at $49,895 with 19-inch wheels, leather upholstery, a 12.3-inch digital instrument display, four-zone climate control, a leather steering wheel, and aluminum sill plates and roof rails. The range then splits in two directions, both positioned as "premium": The Inscription trim level will focus on luxury features, adding items like LED headlights, illuminated sill plates and 21-inch wheels starting at $55,495. Alongside Inscription, Volvo will also offer the sportier XC90 R-Design, with 22-inch wheels and a number of items borrowed from Inscription. R-Design will start at $53,895.

Volvo brought us to northeastern Spain to try out the new XC90, far from the frozen wasteland of the northeastern U.S. that the SUV will traverse come next fall. The largely deserted Spanish coast was a good place to get a baseline feel for the new seven-seater without having to fill up the windshield-washer reservoir twice a day.

First, the redesigned interior is as airy as it looks in the photos -- and far softer, as well. Volvo lavished the door handles and just about every surface below the SUV's shoulderline in nicely padded leather that feels very different from the rock-hard interiors of German SUVs. The seats, which Volvo spent no less than seven years developing, are wonderfully ergonomic and work well with the interior design. Volvo prides itself on uncluttered interiors, and the positioning and framing of the touchscreen infotainment system is far less fussy than in the German competition. Buttons underneath the screen and on the steering wheel control essential functions that you might want to reach for and find without taking your eyes off the road.

At highway speeds, the XC90 stays eerily quiet, only offering up a little bit of wind noise. The transmission shifts through the eight gears almost imperceptibly, without lingering in any gear longer than needed, and it takes very little time to get the large SUV up to speed. The steering stays relatively light at high speeds, but there is a reassuring feeling of stability, with the road surface filtering through to our fingertips to a comfortable degree. The new electric power-steering system is nicely weighted, and it transfers the weight of the car around in a manner that's easy to predict.

As Spanish roads offer up roundabouts at a rate of about one per minute, we got plenty of opportunity to test out the SUV's cornering abilities. Body roll is present, but the XC90 does not feel top-heavy, a criticism of the previous-generation model, which could feel heavy and ponderous when rounding corners. Instead, the new XC90 is reasonably quick on its feet, and it tackles the roundabouts without drama or complaint from the tires.

Volvo's new Sensus touchscreen is pleasantly easy to use, requiring no consultations with the owner's manual for the most basic functions -- it's essentially a very large iPhone. About the only ergonomic miscues we noted involve the accessibility of the third row of seats, which are still best considered an occasional accessory, and the fact that the front visors, large though they may be, do not extend out. That last detail often goes overlooked on test drives at the dealership, and it’s inexcusable in this price category. Then again, the Rolls-Royce Ghost doesn't have extendable visors, either.