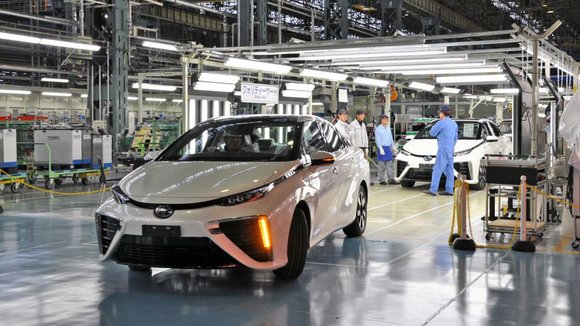 A look at the small shop where just 13 workers assemble the Toyota Mirai fuel cell vehicle.

The disparities are stark between the petite workshop making Toyota’s futuristic Mirai fuel cell sedan and the massive assembly lines churning out its other cars. Only three Mirais creep down the glistening white floors a day, while 13 workers -- yes, just 13 -- in blue hard hats tighten suspensions, hem door trim and install center stacks by hand.

Some even have time to stand around cross-armed.

There is no cacophony of andon bells. Indeed, not even an andon line to stop the flow if problems crop up. There are stacks of parts racks, even a whiteboard, separating cars coming through. And at this back lot workshop, there is no conveyor even moving the vehicles. They are pushed between stations like apple carts.

It may seem ironic Toyota Motor Corp.’s most advanced vehicle, a car that runs on hydrogen and emits water, has such a low-tech birth. But President Akio Toyoda says the Mirai embodies a return to roots, in attention to quality and pioneering spirit. Indeed, even though actual production of the Mirai began in December, Toyoda said he deliberately chose today, Feb. 24, to celebrate. That is because the day is the fifth anniversary of what many in the company consider its nadir.

Exactly five years earlier, Toyoda was hauled before a U.S. congressional panel and given a humiliating grilling about his company’s unintended acceleration recalls. “For us, that date marks a new start,” Toyoda said at today's line off ceremony for the fuel cell car. “This is not to reflect on the past, but rather to celebrate Toyota’s new start, where we take a fresh step towards the future.”

Since that moment, Toyoda pledged to rebuild the company with a back-to-basics emphasis on quality and top-notch product. No plant epitomizes that better that the Motomachi plant now making the Mirai. The car is being hand-built in the same workshop that built the Lexus LFA sports car. The master craftsmen working its line were chosen for their car-building acumen, then hone their skills for two years building the Mirai.

“These facilities are not so advanced. Rather, we rely on the work of our skilled employees,” Toyoda said. “This is similar to how things were when Toyota was just starting out.” Yet, the Mirai’s small-batch, kid-glove treatment also underscores the challenges of introducing the new technology.

“Compared with other plants, this has very low productivity,” said Mitsuyuki Suenaga, an assistant manager at the Motomachi workshop. “It is all manual.” That low productivity contributes to the car’s hefty price tag and testifies to the fact that demand is still in its infancy.

Nevertheless, Toyota is already boosting production plans. Last month, it said it will make 2,000 vehicles a year in 2016 and 3,000 in 2017. When Toyota unveiled the car in November, executives said it would achieve cumulative sales of 3,000 by the end of 2017. The company plans to build just 700 in 2015, to feed sales in Japan, Europe and the United States.

Toyoda conceded sales would be slow in the startup. “The Mirai has yet to prove itself useful in the daily lives of consumers, and we will now be expected to show its true worth,” Toyoda said. “We can keep moving along this road, step by step.”

Selling more hydrogen cars is a chicken-and-egg problem. People are reluctant to buy the cars because there is no widespread refueling network. But there is limited refueling because so few people are buying the cars. Toyota thinks both sales and infrastructure will grow if more companies made fuel cell cars.

To spur adoption of the technology, Toyota said last month it will allow rivals to use some 5,680 of its fuel cell-related patent licenses without paying royalties. The gambit echoed a similar move last year by Tesla Motors Inc., which opened its patents to promote electric vehicles. The Toyota will allow royalty-free use of its FCV patent licenses by those manufacturing and selling FCVs through 2020. The patents cover fuel cell stacks, high-pressure tanks and control systems. Toyota is also opening about 70 hydrogen station-related patents for installing and operating pumps.

But plenty of other competitors are already on board with their own hydrogen fuel cell programs. Honda, which introduced its first fuel cell vehicle in 2002, is working on its third-generation vehicle. It aims to start selling that car globally in 2016. General Motors, which launched a test fleet of 119 hydrogen-powered Chevrolet Equinox crossovers in 2007, partnered with Honda last year to develop fuel cell systems and hydrogen storage technologies for 2020.