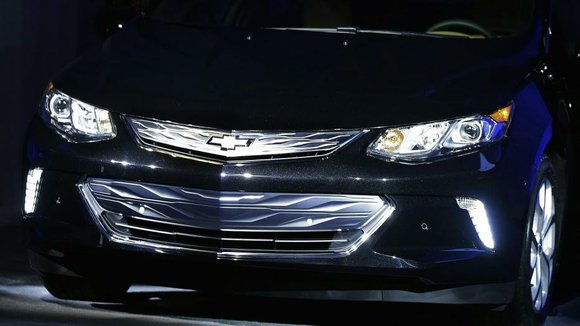 While announcing a host of new tech features at the International CES in Las Vegas, Chevrolet suprised the crowd with a brief look at the 2016 Chevy Volt. (The crowd included a guy wearing a baseball cap that had a big, backlit display showing the Facebook "Like" button on the front of it, at least 4 people who were vaping through the entire presentation, and several guys wearing heavily embroidered shirts.)

Anyway, when the next Volt is announced officially at the Detroit auto show, we're expecting extended range, greater efficiency and a small boost in displacement from 1.4 liters to 1.5 liters.

Chevy also announced a few new OnStar 4G LTE-enabled features that will be available on other Chevrolets. The first is being called "prognostic technology" and is basically an expansion of OnStar's existing vehicle diagnostic capabilities. As it works today, the system monitors oil life, tire pressure and other data. Starting with select 2016 models like Equinox, Tahoe, Suburban, Corvette, Silverado and Silverado HD, the system will also monitor the battery, starter motor and fuel pump. The tech will be added to other models in 2016, and Chevy expects to add other parts and systems to the list of those that are monitored in future model years. Also in 2016, OnStar users will be able to view diagnostics any time, rather than waiting for a monthly diagnostic e-mail as they do now.

A partnership with Progressive Insurance was also announced that will allow drivers to voluntarily share data on their driving habits in pursuit of reduced insurance rates. It's part of Progressive's Snapshot program that allows drivers to share driving data with the insurance company over a 90-day period with the goal of lowering their rates. It's expected to roll out this summer and will be available on all 2016 GM vehicles as well as some 2015, 2014 and 2013 models.

Finally, OnStar AtYourService was announced. (The OnStar marketing people are not fans of using the space bar.) The new service is being called a "commerce and engagement offering," and really, that explains everything you need to know about it. Nah, just kidding, it's just a totally perplexing way of saying that they'll be using OnStar to sell you stuff. AtYourService will offer discounts at businesses like Dunkin Donuts and it will allow drivers to use OnStar to book a hotel room through Priceline, then have directions to the hotel sent to their cars. The service will also offer coupons through RetailMeNotand Entertainment Book and help users find parking using Parkopedia. Audiobooks.com will offer e-books through the service, which should come online early this year, as well.