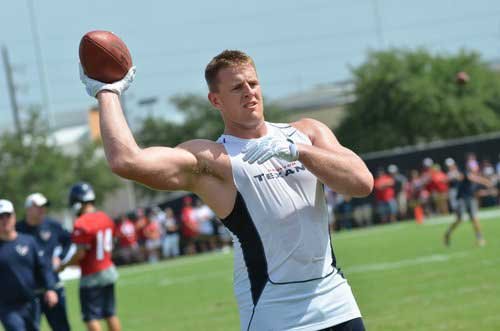 HOUSTON – Houston Texans DE J.J. Watt was named to the Pro Football Writers of America All-NFL Team, it was announced today. It is the third consecutive season Watt has earned the honor, tying him with Seattle Seahawks CB Richard Sherman and S Earl Thomas for the longest active streak garnering the accolade.

Watt, a three-time All-Pro, totaled 78 tackles and 20.5 sacks and scored 32 points on three receiving touchdowns, a fumble return touchdown, an interception return touchdown and a safety. The 2012 AP Defensive Player of the Year led the NFL with 50 quarterback hits, 29 tackles for loss and five fumble recoveries. He ranked second in the league in sacks (20.5), tied for second in defensive touchdowns (two) and tied for third in forced fumbles (four).

The fourth-year pro out of Wisconsin became the first player in NFL history to record two seasons with more than 20 sacks (20.5 in 2012 and again in 2014). He also joined Jason Taylor as the only player to record 10 sacks and 10 passes defensed in two different seasons since 1991. In addition, Watt was the first defensive lineman since Chicago Bears DE Connie Mack Berry in 1944 to have at least five touchdowns in a season. Watt was also the first player since Chicago Bears DB J.C. Caroline in 1956 to score multiple touchdowns on offense and defense in the same season.

Watt had two or more sacks in all six division games in 2014 and his 14 sacks against division opponents were the most since the NFL moved to a six-game division schedule in 2002. He was one of two unanimous selections to the AP All-Pro team and was voted into his third Pro Bowl as a starter.

Watt was named the AFC Defensive Player of the Month for September and December. He tallied 9.0 sacks in the final month of the season, which was the most in the month of December since 1982.