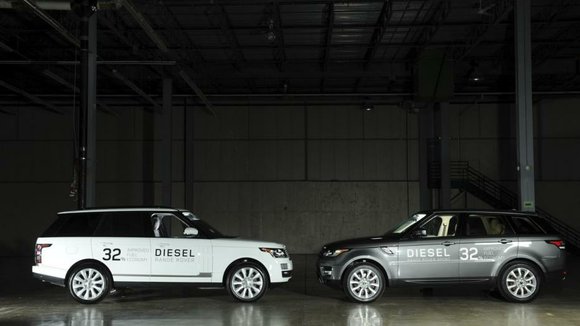 Jaguar took to the 11th floor of Detroit's Argonaut Building ahead of the Detroit auto show to announce new diesel engines, tout some impressive sales figures and tease the upcoming Jaguar F-Pace crossover.

The biggest news is that all Jaguar and Land Rover models, save for the F-Type, will soon be available with diesel powerplants -- starting with the Range Rover and Range Rover Sport, which will get 3.0-liter turbodiesel V6s. Diesel Landys will carry the Td6 designation, as in Range Rover Sport Td6. The new variants should be around 32 percent more fuel efficient than their gasoline counterparts. Jaguar Land Rover claims diesel models will deliver 20 to 30 percent better fuel economy than gasoline models.

Jaguar's new XE sedan, touted as a competitor to the BMW 3-series was on hand as well, with Jaguar representatives suggesting that the diesel variant could deliver fuel-economy figures that begin with the number four.

As mentioned, Jaguar Land Rover representatives took a moment to share some sales figures. Overall, the company saw a 9 percent increase in global sales, moving a total of 462,678 vehicles in 2014. Jaguar was up 6 percent overall with 81,570 sales, and Land Rover sales were up 9 percent for a total of 381,108 global sales in 2014.

We also saw a bit more of the C-X17 concept that made its debut before the 2013 Frankfurt auto show and learned that the production version, the F-Pace, is on schedule to enter the small, performance-focused crossover market in 2016.