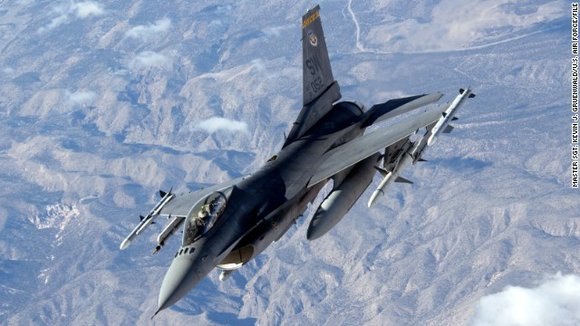 The jet was returning to its base shortly after takeoff, the statement said. It did not give a location, other than to say the crash was not in Syria or Iraq.

(CNN) -- The upcoming Iraqi assault to retake Mosul from ISIS control could include US military advisers near the front lines. US military leadership has held open the possibility it would recommend moving advisers closer to combat lines and as the key Mosul battle looms that remains a potential consideration "if and when they believe it's necessary" a senior US military official tells CNN.

The possible recommendation would need to be approved by President Obama who has said that US troops will not being sent on a combat mission. But putting advisers with front line Iraqi troops puts American troops in close range of what is likely to be an intense battle with the terror group.

General Martin Dempsey, the chairman, and General Lloyd Austin, head of CENTCOM, would make that recommendation to President Obama if they determine Iraqi's need US help and there is no other option for providing it.

He declined to be named due to the sensitivity of the situation but has direct knowledge of both generals' thinking.

The generals want to wait as long as possible to decide if moving American ground troops closer to the front lines is necessary. Their hope is that Iraq will be able to field more experienced units perhaps as soon as this spring that can begin the Mosul assault, the official told CNN. Right now, the most experienced and loyal Iraqi units are protecting Baghdad. The Iraqis may need to be convinced to move them into the Mosul operation, and backfill with other units. Retaking Mosul from ISIS is considered one of the most important objectives of Iraq forces. This month coalition airstrikes have stepped up around Mosul, in an effort to cut key ISIS supply lines into the city, as an opening move to a future assault. The US military assessment is the soonest the assault could begin is spring.

President Obama has been adamant that no U.S. troops will be put into direct ground combat in Iraq.

In a speech troops in September Obama said, "The American forces that have been deployed to Iraq do not and will not have a combat mission. They will support Iraqi forces on the ground as they fight for their own country against these terrorists."

What Dempsey and Austin are holding open is the possibility of a small number of US military troops working as advisers alongside Iraqi units involved in the upcoming Mosul assault in a front line combat situation. Those troops could potentially also work on the ground to help Iraq units pick out targets to strike, if a recommendation is made and the mission approved.

In September Dempsey said he believed US advisers on the front lines would not be needed. "But if it fails to be true, and if there are threats to the United States, then I of course would go back to the President and make a recommendation that may include the use of U.S. military ground forces." In recent weeks US advisers have gone out in the field.

Dempsey for now is strongly focusing on the pace of the Iraqi government meetings its goals first, according to the official. He still wants to see more progress on Iraq forming a unity government, proceeding with reconstruction goals and countering ISIS propaganda, the official said. "if we offer too much before Iraqi's are ready, we are just painting over the rust," the official said. Recent comments by Prime Minister Abadi that the coalition wasn't doing enough to support Iraq only reinforced Dempsey's view the official said.

And even working as advisers is risky for troops. Canadian forces in the field recently had to return fire when they came under attack during an advisery mission.

As for ISIS's current strength, the US military assessment continues to be their momentum has been somewhat stalled in Iraq and territory gains in Syria are stagnant, the official said. The US also believes ISIS is stepping up its terror tactics in both areas, including forcing people to fight, because they are having trouble recruiting and paying new fighters, the official said.