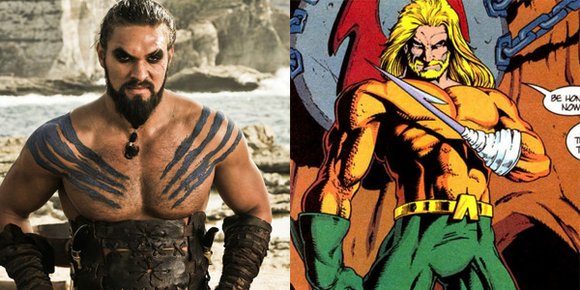 He had to keep quiet about it for the majority of last year, but now Jason Momoa can finally talk about his upcoming role as the DC Cinematic Universe’s Aquaman as much as he wants to. About 15 years after playing lifeguard Jason Loane on Baywatch: Hawaii, Momoa will be returning to the ocean as DC’s King of Atlantis. In addition to eventually leading his own film, the Game of Thrones and Red Road star will also be one of the main members of the Justice League, which would be exciting for any actor, but the role is especially important to Momoa for another reason—his family.

Momoa explained to The Daily Beast how fortunate he is to have scored the role of the aquatic superhero not only as an actor supporting his family, but to finally have a role that his kids will actually be able to watch. Said Momoa:

"It’s awesome as an actor to know what your future is going to be because I have children and I’ve busted my ass to put food on the table. It’s awesome knowing that I’m going to be in Justice League because my son is the biggest Batman fan and my daughter loves Wonder Woman. It’ll be cool for them to see me in something because they’re not going to be watching Game of Thrones or Red Road anytime soon, but now they can see Daddy kicking ass in IMAX."

Yeah, most of Momoa’s most well-known roles aren’t appropriate for young eyes, although depending on their age they may be old enough to watch him in Stargate: Atlantis. So this new role is prime opportunity for Momoa to show his kids what he does. And, maybe the Caped Crusader and the Amazon Princess won’t be their favorites anymore once they see their dad, trident in hand, swimming through the ocean and leading the creatures of the deep against evildoers. A scene like the one below would certainly seal the deal.

Aquaman is arguably the highest profile superhero in the DCCU after Batman, Superman and Wonder Woman, and we’ll be seeing a lot of him in the future. Debuting in Batman V Superman: Dawn of Justice (although who isn’t), Momoa will reprise Aquaman for Justice League Part One in 2017, the Aquaman solo film in 2018 and Justice League Part Two in 2019. Momoa also reiterated how glad he is that DC chose him to play the King of the Seven Seas, citing that as a Hawaiian (specifically that as a Kanaka Maoli, their gods are Kanaloa and Maui), he gets to represent islanders rather than a blonde guy. With over 70% of the Earth being water, he’ll certainly have a lot of terrain to cover on his own, while all his teammates deal with that remaining 30%.

You can catch Momoa’s first appearance as Aquaman when Batman V Superman: Dawn of Justice hits theaters on March 25, 2016.