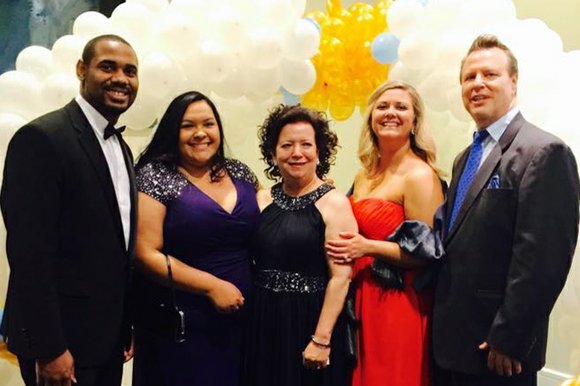 HOUSTON, TEXAS…Theatre Under The Stars (TUTS) is pleased to announce that Ms. Rosa Rocha, Founder and Board President of Friends of Down Syndrome in Houston, was one of three recipients of the prestigious Broadway League Educator Apple Awards. These awards were presented at the seventh annual National High School Musical Theatre Awards (NHSMTA) held at the Minskoff Theatre in New York City on June 29. As a member of The Broadway League, TUTS nominated Ms. Rocha for this special honor.

The Broadway League, the national trade organization for the commercial theatre industry, has been presenting the Educator Apple Awards since 2003. These awards acknowledge the efforts of arts educators and advocates from around the country who support programs relating to Broadway or Touring Broadway shows, promoting further development of theatre education. Ms. Rocha was awarded for her organization’s collaboration with TUTS, which allows teens and adults with Down syndrome to experience Touring Broadway, forging a lifelong bond between these individuals and theatre.

“I am honored to have been chosen to receive this award. I am excited that Friends of Down Syndrome’s collaboration with Theatre Under The Stars is being recognized for the awesome result that we have seen in our students,” said Ms. Rocha.

Through this partnership with TUTS, Ms. Rocha introduced high school and college-aged students in the Down Syndrome Academy to Rodgers + Hammerstein’s Cinderella. The participants utilized loco motor and spatial awareness skills through creative movement and dance centered on the music of Cinderella and performed a waltz for attendees of the Cinderella Ball, a fundraising event for Friends of Down Syndrome. They also took in a performance of TUTS’ presentation of Rodgers + Hammerstein’s Cinderella at The Hobby Center.

The Broadway League was pleased to recognize Ms. Rocha’s outstanding efforts and her passion to enrich lives through theatre. TUTS was privileged to collaborate with Ms. Rocha and Friends of Down Syndrome to help further their commitment of expanding arts education throughout the Houston community and will present the award to her at their upcoming board meeting on July 13.

To learn more about TUTS, visit TUTS.com. For more information on Friends of Down Syndrome, visit friendsofdownsyndrome.org.