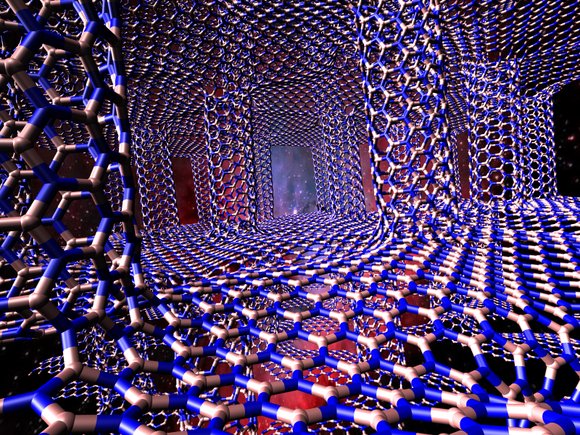 HOUSTON – (July 15, 2015) – Three-dimensional structures of boron nitride might be the right stuff to keep small electronics cool, according to scientists at Rice University.

Rice researchers Rouzbeh Shahsavari and Navid Sakhavand have completed the first theoretical analysis of how 3-D boron nitride might be used as a tunable material to control heat flow in such devices.

Their work appears this month in the American Chemical Society journal Applied Materials and Interfaces.

In its two-dimensional form, hexagonal boron nitride (h-BN), aka white graphene, looks just like the atom-thick form of carbon known as graphene. One well-studied difference is that h-BN is a natural insulator, where perfect graphene presents no barrier to electricity.

But like graphene, h-BN is a good conductor of heat, which can be quantified in the form of phonons. (Technically, a phonon is one part -- a "quasiparticle" – in a collective excitation of atoms.) Using boron nitride to control heat flow seemed worthy of a closer look, Shahsavari said.

"Typically in all electronics, it is highly desired to get heat out of the system as quickly and efficiently as possible," he said. "One of the drawbacks in electronics, especially when you have layered materials on a substrate, is that heat moves very quickly in one direction, along a conductive plane, but not so good from layer to layer. Multiple stacked graphene layers is a good example of this."

Heat moves ballistically across flat planes of boron nitride, too, but the Rice simulations showed that 3-D structures of h-BN planes connected by boron nitride nanotubes would be able to move phonons in all directions, whether in-plane or across planes, Shahsavari said.

The researchers calculated how phonons would flow across four such structures with nanotubes of various lengths and densities. They found the junctions of pillars and planes acted like yellow traffic lights, not stopping but significantly slowing the flow of phonons from layer to layer, Shahsavari said. Both the length and density of the pillars had an effect on the heat flow: more and/or shorter pillars slowed conduction, while longer pillars presented fewer barriers and thus sped things along.

While researchers have already made graphene/carbon nanotube junctions, Shahsavari believed such junctions for boron nitride materials could be just as promising. "Given the insulating properties of boron nitride, they can enable and complement the creation of 3-D, graphene-based nanoelectronics.

"This type of 3-D thermal-management system can open up opportunities for thermal switches, or thermal rectifiers, where the heat flowing in one direction can be different than the reverse direction," Shahsavari said. "This can be done by changing the shape of the material, or changing its mass – say one side is heavier than the other – to create a switch. The heat would always prefer to go one way, but in the reverse direction it would be slower."

Shahsavari is an assistant professor of civil and environmental engineering and of materials science and nanoengineering. Sakhavand is a former graduate student at Rice.