First on CNN: Former President George H.W. Bush in the Hospital After Fall 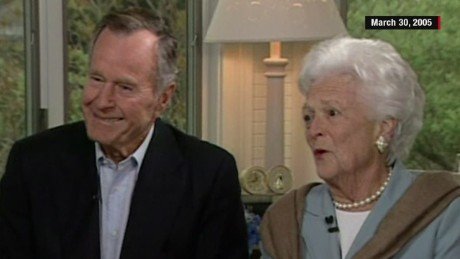 On Tuesday, President George H.W. Bush and first lady Barbara Bush celebrate their Platinum Anniversary. The couple was married on Jan. 6, 1945, in Rye, New York, and went on to become one of the most recognizable couples in the world. They raised six children and with unwavering love now hold the record as the longest-married presidential couple.

By Kevin Bohn and Peter Morris

(CNN) -- Former President George H.W. Bush fell Wednesday while at his summer home in Kennebunkport, Maine, breaking a vertebrae in his neck, but "it was not life threatening," his spokesman Jim McGrath told CNN.

Bush was taken to a hospital in nearby Portland where he is "very stable," McGrath said.

The former president was never disoriented.

"We are not expecting a long stay," McGrath said, though he added Bush would be treated with a neck brace.

Bush last month just turned 91. He revealed several years ago he suffers from a form of Parkinson's disease, which has left him unable to walk, so he gets around either in a wheelchair or a scooter.

He was hospitalized in 2014 after suffering a shortness of breath. In 2012, he was in the hospital for several months after he contracted bronchitis.

Bush and his wife last week appeared at several events in Maine with hundreds of his son Jeb's top donors to his presidential campaign.

Bush spokesman McGrath tweeted on Wednesday evening, "41 fell at home in Maine today and broke a bone in his neck. His condition is stable -- he is fine -- but he'll be in a neck brace."

The Bush family tweeted their thanks and thoughts Thursday morning.

Jenna Bush Hager wrote: "Always touched by kindness: thanks for all of your thoughts+prayers for our dear Gamps. We are optimistic that he will heal well."

Former Republican nominee Mitt Romney made an allusion to Bush's past as a U.S. Navy pilot in World War II: "Shot down and rescued, parachuted and landed safely, @GeorgeHWBush yesterday takes a fall. May he be victorious again, I pray."

Bush has continued his adventurous ways, even as he cracked 90 years. Last year, to celebrate his 90th birthday, the former president went skydiving. He has previously parachuted seven times, including for his 75th, 80th and 85th birthdays and when he was shot down in WWII.

CNN's Sophie Tatum and Tom LoBianco contributed to this report