Becomes first player ever enshrined into Cooperstown as an Astro 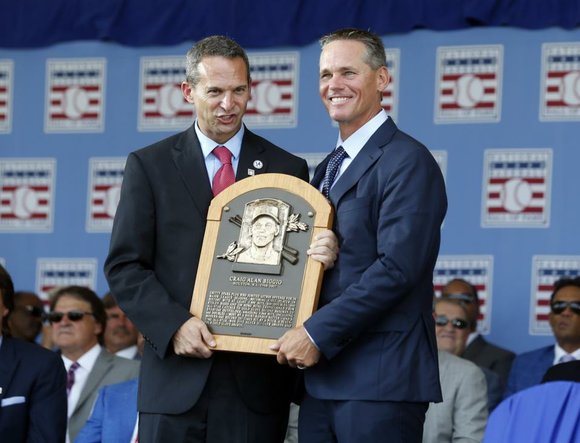 COOPERSTOWN, NY--In front of close to 50,000 fans, many of which were from Houston, Craig Biggio was officially inducted into the National Baseball Hall of Fame today along with pitchers Randy Johnson, Pedro Martinez and John Smoltz.

Biggio becomes the first player ever inducted into Cooperstown as a member of the Houston Astros. During the historic ceremony, Biggio spoke passionately about the Astros fans and the great support he has received from them. He also reflected on his career, thanking the many individuals that played a role in his success, beginning with his days as a catcher at Seton Hall University. Among many others, Biggio credited his wife, Patty, for much of his success. He also spoke about the transition he made from catcher to second base early in his career.

Astros fans made a strong showing in Cooperstown this weekend as Main St. has been dominated by the Astros logo and the orange and blue team colors.

“It is really special,” Biggio said when asked about the fan support in Cooperstown after the ceremony. “It is not easy to get here, so for them to come to this and enjoy this together was really special. It really has been a blast.”

Biggio was also joined by hundreds of friends, family members, former teammates and Astros front office personnel, many making the trip on a flight chartered by the Astros on Friday morning.

In his 20 Major League seasons (1988-2007) in an Astros uniform, Biggio, who currently serves as a special assistant to the general manager for the Astros, was one of the top players of his era, excelling at catcher, second base and in the outfield. The seven-time All-Star played a vital role in the most successful run in franchise history, which included six postseason appearances in a nine-year span and a National League Pennant in 2005.

Biggio is one of just 29 players in ML history to reach 3,000 hits, and is also one of just 15 players in Major League history to reach both 1,000 extra-base hits and 3,000 total hits, joining a list that includes Hank Aaron, Stan Musial, Willie Mays, Carl Yastrzemski, Ty Cobb, Tris Speaker, George Brett, Cal Ripken Jr. and Pete Rose (Biggio is only the second player that was primarily a middle infielder to accomplish this feat, joining Ripken). It is noteworthy that Biggio played 12 of his seasons (1988-99) in the pitcher-friendly Astrodome.