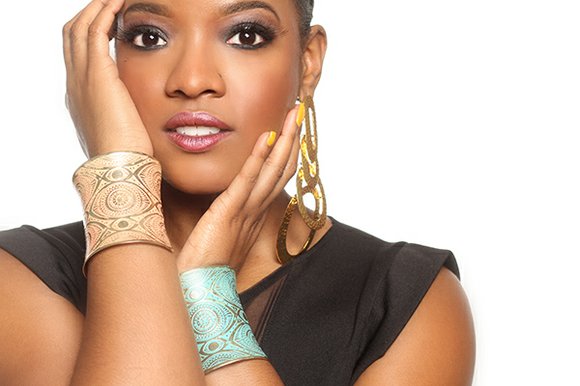 Ashley Tamar Davis is a Houstonian, HSPVA alum and Grammy nominee artist that returned home to Houston to star in the phenomenal hit “Motown the Musical.” Motown the Musical is celebrating its one- year anniversary on the road with its first national tour. The show ran at Houston’s Hobby Center on July 21-26, 2015.

I was lucky enough to grab a ticket to Motown the Musical’s sold out first night and hear Davis’s powerful vocal performance in the hit show. It was TRUELY AMAZING. I, along with the rest of the Houston audience, was blown away.

The Hobby Center stage was not the only place that Davis shared her vocals while in Houston. She made additional stops to Fleming Middle School for the Northeast Cultural Council Summer Arts in School, Delta Sigma Theta Sorority, Inc.’s 52nd National Convention and conducted numerous media interviews, of course. She also shared that she would not leave Houston without making visits to get some good ole’ Frenchy’s chicken and Pappadeaux’s.

No stranger to the entertainment industry, Davis has been singing since the age of 3. As a teen she sung with Beyonce Knowles, Kelly Rowland, and Latavia Robinson in the girl group Girls Tyme. Instead of continuing on with the group, Davis choose a solo career. Becoming known as simply Tamar, she released her debut album “My Name Is Tamar” in 2010.

Fans may also remember her as a recent Prince’s protégé (Yes! She toured with Prince!). She has also starred in several of Tyler Perry hit plays including The Marriage Counselor, Laugh to Keep from Crying, and Madea's Big Happy Family to name a few view.

I got a chance to chat it up with this superstar, powerhouse vocalist, and dear friend of mind and it was a true blessing. Check out the interview below and find out what else Davis has been up too!

1. It’s so great for you to return to Houston with such a FAB show. So first tell us a little about Motown the Musical and why should we see it?

Motown the musical is a powerhouse musical. I first saw the show in august in 2013 it was the first Broadway show I have ever seen. At the time I was performing in “Big Otis” the Musical and the Director came to see my show and he said consider this your Audition. I went to see this show and from the time the curtain goes up you are just blown away by the music! Motown the musical is actually a storyline about Barry Gordy and how he has met every single person that has changed his life as well as him changing their life. It’s based off his book “To Be Loved” so it is not just musical, you are really hearing his story so it’s really powerful.

2. Now I hear your playing quite a few characters from the show including Esther Gordy and music icons Gladys Knight and Diana Ross. Who’s been your favorite singer to portray in the show so far?