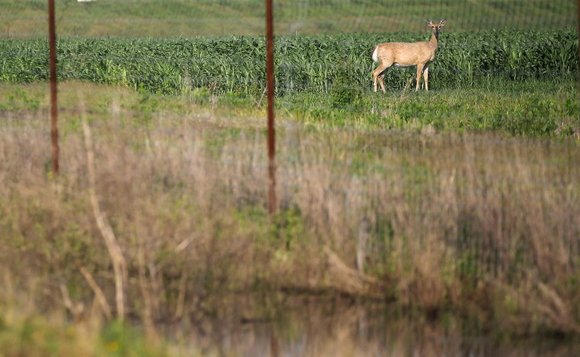 According to the National Weather Service, during the month of May Texas received 35 trillion gallons of rain, enough to cover the entire state in eight inches of water.

AUSTIN – Things that live on the ground typically aren’t adept at treading water for long. In the aftermath of flood events that have hammered much of the state recently, biologists with the Texas Parks and Wildlife Department say encounters with various wildlife will not be uncommon.

According to the National Weather Service, during the month of May Texas received 35 trillion gallons of rain, enough to cover the entire state in eight inches of water.

“It is not uncommon for wildlife encounters to increase after flood events,” says Andy Gluesenkamp, a herpetologist with TPWD. “People should be aware that snakes and other wildlife, including skunks and raccoons, may approach or enter yards and houses where they do not normally occur. Over time, displaced wildlife will return to their usual habitats.”

Common sense precautions should be practiced; be aware that snakes and other animals may seek shelter in debris piles and caution should be used during cleanup efforts.

“A snake in the yard is not a cause for panic,” he says. “They don’t want to be there, either, and if left alone will usually leave on their own. You’re more likely to come upon a skunk, a mound of fire ants or a wasp nest in a brushpile than a venomous snake. If you do have an encounter with a problem snake, seek help from local animal control or licensed snake removal experts.”

Recent storms also coincided with the time of year when newborn wildlife start showing up on the landscape. As flood waters recede, wildlife officials anticipate seeing more young wild animals unnecessarily being picked up by the general public and referred to game wardens or wildlife rehabilitators for treatment and rearing.

The most commonly referred animals are baby birds and deer fawns. Recent flooding will likely increase the temporary displacement of these and other wildlife. The compulsion to help or investigate an animal that looks abandoned can be overwhelming, but interference could harm its chances of rejoining its caretaker. While most of these animals are picked up by well-meaning persons, it is important to realize that many such human-animal encounters are unnecessary and can even be detrimental to the wildlife concerned.

Tips and precautions about encounters with wildlife are available online at http://tpwd.texas.gov/huntwild/wild/rehab/orphan/ .

Flooding will cause some immediate impacts to nesting efforts of grassland bird species such as bobwhite quail and turkeys. But biologists indicate those species will still have time to re-nest and the species will capitalize on the overall improved health of the grasslands..

The good news, say wildlife officials, is that recent excessive rainfall is being viewed as a “drought buster” event that is going to be fantastic for the health of many ecosystems and habitat-types across Texas. For instance, the state's bottomland hardwood forests will receive flood waters deep across the alluvial plains that deposit rich nutrients for lots of native vegetation. Coastal estuaries will get a much-needed flush of fresh water, soil, and nutrients, which will help sport fisheries.

TPWD wildlife biologists remind private landowners across the state of federal farm program benefits through the Texas Farm Service Agency that may be available to help eligible ranchers and farmers recover from recent heavy rains and flooding. For more information on disaster assistance programs and loans visit www.fsa.usda.gov/ or contact your local FSA Office. To find your local FSA county office, visit http://offices.usda.gov.