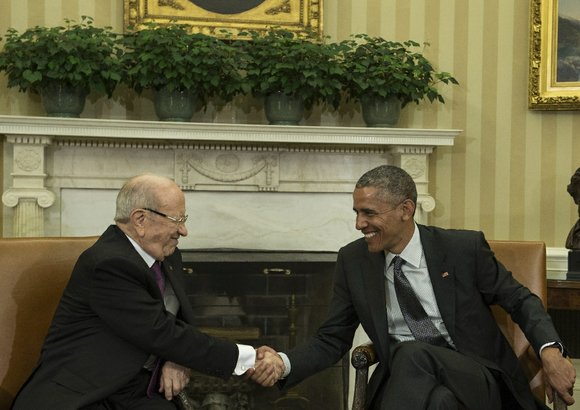 WASHINGTON (CNN) -- President Barack Obama acknowledged in an interview Tuesday that the potential for an Israeli-Palestinian peace deal during his remaining time in office was slim.

"I don't see a likelihood of a framework agreement" in the next 18 months, Obama told Israel's Channel 2.

Obama had been asked about the prospects for a peace arrangement under the current Israeli and Palestinian leadership. During the recent Israeli election campaign, Israeli Prime Minister Benjamin Netanyahu ruled out a Palestinian state during his tenure, a position that the White House claimed broke years of prior policy.

Since his reelection, Netanyahu has said he did support the creation of a Palestinian state. But Obama said Tuesday that his support "has so many caveats, so many conditions, that it is not realistic to think that those conditions would be met any time in the near future. And so the danger here is that Israel as a whole loses credibility."

He continued, "Already, the international community does not believe that Israel is serious about a two-state solution." And he suggested that reality could complicate America's traditional support for Israel at the United Nations, support he noted was being evaluated in light of Netanyahu's campaign comments.

Obama admitted in the interview that he often disagrees with Neyanyahu but said he enjoys "jousting" with him. He chastised the media for casting his relationship with the prime minister in personal terms because it makes for an easier narrative.

The President and his Israeli counterpart have had a notoriously icy relationship during Obama's tenure. The reporter did not give up pushing the relationship, citing the Prime Minister's visit to the White House four years ago, saying when he took the time to speak about some chapters in Jewish history, she could "see your jaws locked."

The President immediately laughed it off, firing back, "Oh no, I think ... I was probably just hungry and waiting for lunch."

In the interview, Obama refused to speculate on the possibility of Israel conducting an airstrike on Iran without the support or backing of the United States.

"What is the worst scenario is the path that we're currently on, in which there's no nuclear resolution, and, ultimately, we have no way to verify whether Iran has a weapon or not," Obama said.

In the lead-up to the framework deal with Iran to curb its nuclear program that the U.S. and five world powers negotiated with Iran in April, Netanyahu waged a campaign to deter the United States from signing a pact with Tehran, including in remarks to Congress. Critics of the deal, including Netanyahu, claim it will empower Iran by loosening longstanding sanctions without sufficient concessions in return.

The White House said Netanyahu broke protocol by speaking to lawmakers without first consulting with the administration.

Obama and his administration have one month to finalize a deal with Tehran to curb its nuclear activity.

But the President said that the deal he hopes to complete by July 1 is the only way to keep Iran from obtaining a nuclear weapon.

"The best way to prevent Iran from having a nuclear weapon is a verifiable, tough, agreement," he said in the interview, which took place Friday. "A military solution will not fix it, even if the United States participates. It would temporarily slow down an Iranian nuclear program but it would not eliminate it."

The proposed deal with Iran has strained U.S.-Israel ties, with Obama repeatedly defending his commitment to Israel's security. He spoke last month at a synagogue in Washington and told the audience that the Iran deal would ensure Iran doesn't acquire nuclear weapons.