TSU Tigers: A Winning Season Capped as the Conference’s Best 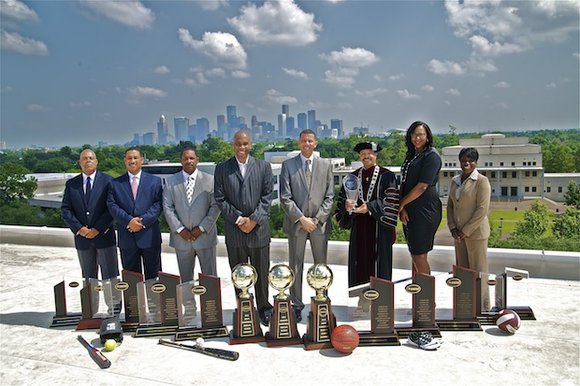 "This is truly a historic milestone for our athletics program," said Dr. McClelland. "Our student-athletes at Texas Southern University have set a new standard with their respective performances throughout the year."

President John M. Rudley praised the program, coaches and staff for the outstanding 2015 season. “This has been a year of record breaking for the Texas Southern University Tigers Athletics Program. Dr. McClelland has helped orchestrate one of the greatest come-backs of any athletics program in the country. He has made good on all the promises we set when we began this journey in 2009.”

The SWAC began recognizing the top men’s team in 1969.

“Dr. McClelland and his team have achieved excellence both in the classroom and on the field, rising from the worst academic record to one of the top; experiencing the winningest season in all sports, and now receiving the Henry Award, one of the most significant honors bestowed by the Southwestern Athletic Conference. This is the first time in the history of TSU Athletics that the program has been awarded such honors, and we congratulate the student athletes, coaches, staff, and administration for a job very well done,” Rudley said.

Texas Southern University’s Athletics program excelled both on the field and in the classroom this year.

Athletics’ success culminated on Saturday, May 16, when 34 student athletes crossed the stage to receive their diplomas in fields ranging from business to science. This year 77 student athletes made the Dean’s Academic List for maintaining a 3.0 GPA. The average APR (Academic Progress Rate) for the teams reached 970 this year, with the NCAA requirement being 930 or better.

As noted, the Tigers also excelled in competition this year, surpassed the previous 21-year TSU record of four championships attained in 1994 with five championship titles this season.

The TSU baseball team won its first SWAC Championship since 2008, joining over half of the sports programs at Texas Southern that finished the year in 1st or 2nd place. Five sports now hold 2015 Southwestern Athletics Conference (SWAC) championships: men’s indoor track and field, men’s and women’s basketball, softball and baseball. Men’s basketball also won the SWAC Tournament which sent them to the NCAA Regionals while the women went on to play in the NAIA tournament. The TSU softball and baseball teams also played in the NCAA Regional tournaments.