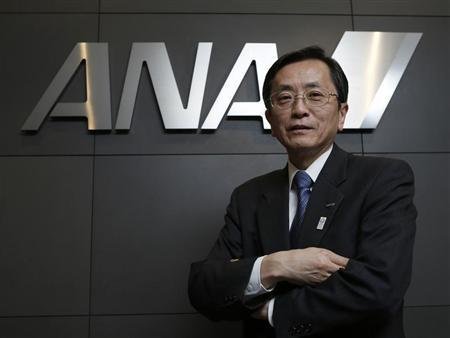 “We aim to provide our customers with greater choice and flexibility for destinations and travel schedules,” said Osamu Shinobe, President and CEO of ANA. “As a key market for the U.S. oil and gas industry, expanding service to Houston— the North American destination for ANA— emphasizes our desire to make travel more convenient. Additionally, this new route will allow us to improve access between Asia and Latin America.”

A member of the Star Alliance and joint venture partner with United Airlines, ANA expanded its nonstop service to Houston, providing passengers with additional daily flights between Houston and Tokyo. Star Alliance members can now choose a morning or afternoon departure in each direction, providing greater flexibility for travelers, especially those taking advantage of ANA’s expanded service to other Asian and American destinations beyond Houston or Tokyo.

“The economic and cultural ties that exist between Houston and Japan continue to strengthen and the arrival of All Nippon Airways is a testament to that growth,” said Houston Mayor Annise Parker. “The City of Houston is thrilled to welcome Japan’s leading airline and we look forward to enjoying an even greater level of connectivity in Asia, thanks to ANA’s extensive global route network.”

“The demand for nonstop air service between Houston and Asia is currently at unprecedented levels,” added Houston Aviation Director Mario C. Diaz. “All Nippon Airways recognizes the strong growth opportunities that exist in the Houston market and they’re anxious to capitalize on them. We welcome their arrival and look forward to a long and mutually beneficial partnership.”

The Boeing 777-300ER used for today’s flight was welcomed to the gate with an official water turret salute. The 250-seat passenger plane includes eight first class and 52 business class seats to accommodate travelers.

Today’s ceremony began with a Taiko Japanese drum performance by local group, Kaminari Taiko. Diaz and Shinobe each addressed the attendees, and they were joined by additional remarks from Jim Compton, United Airlines Vice Chairman and Chief Revenue Officer, and the Honorable Nozomu Takaoka, Consul-General of Japan in Houston and Bob Pertierra, SVP and Chief Economic Development Officer, Greater Houston Partnership. Also in attendance from the office of the Governor of Texas was Oliver Yang, there to present Shinobe with a proclamation. In a gift exchange honoring Texas and Japanese culture, Diaz presented Shinobe with a Stetson cowboy hat and Shinobe reciprocated with an ANA B777 model plane.

All Nippon Airways (ANA) is the 13th largest airline in the world by revenues (2013) and the largest airline in Japan by revenues and passenger numbers. Founded in 1952, ANA flies today on 72 international routes and 115 domestic routes with a fleet of about 240 aircraft. ANA Group has 33,000 employees. In 2013, it carried 46 million passengers and generated revenues of 1.6 trillion Japanese yen. ANA has been a core member of Star Alliance since 1999 and has joint-ventures with United Airlines on trans-Pacific and Asia routes and with Lufthansa, Swiss International Airlines and Austrian Airlines on Japan-Europe routes. Its Frequent Flyer Program, ANA Mileage Club, has more than 26 million members. ANA was voted Airline of the Year for 2013 by Air Transport World Magazine, and was awarded five stars in 2013 and 2014 by the world's leading Airline and Airport review site, SKYTRAX. ANA is the launch customer and biggest operator of the Boeing 787 Dreamliner.

About the Houston Airport System