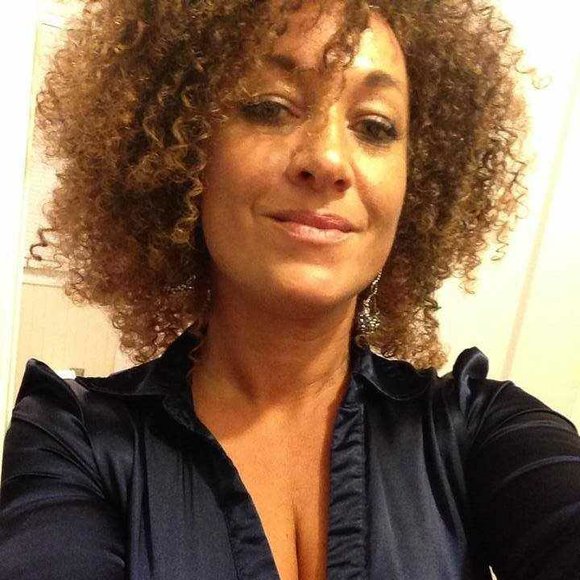 (CNN) -The racial identity of one of the most prominent faces in Spokane, Washington's black community is under question after her parents produced a birth certificate that showed she is white.

Rachel Dolezal, 37, is the head of the local chapter of the NAACP and has identified herself as African-American. But her Montana birth certificate says she was born to two Caucasian parents, according to CNN affiliate KXLY, which also showed an old family photo in its report.

Dolezal has represented herself as at leastrongest part African-American in an application for the police ombudsman commission.

And she has presented the public with a different family photograph posted to the local NAACP chapter's Facebook page. When she announced her father was coming to town for a visit, she showed herself standing next to an older African-American man.

Dolezal's public racial identity came under scrutiny on Thursday, when a reporter from KXLY held up that photo asked her a simple question.

This is how the conversation went:

"This man right here's your father? Right there?"

"You have a question about that?"

"Yes ma'am, I was wondering if your dad really is an African-American man."

"I don't understand the question of -- I did tell you that, yes, that's my dad. And he was unable to come in January."

"Are your parents...are they white?"

Dolezal walked away from the microphone, leaving her purse and keys, and took refuge in a nearby clothing boutique.

Career as a black woman

Dolezal has built a wide-ranging career on her racial identity.

She is not just president of her local NAACP chapter; she is also an academic expert on African-American culture and teaches many related classes at Eastern Washington University.

She represents the black community publicly and vocally, including as a spokeswoman on race-influenced police violence. On Tuesday she spoke to Al Jazeera on the topic.

She has appeared alongside Baltimore City State's Attorney Marilyn Mosby, who has filed charges against police officers in the death of Freddie Gray, a young black man.

The mayor of Spokane appointed Dolezal chairwoman of a police oversight committee to keep an eye on fairness in police work.

After the allegations of faked racial identity surfaced, Mayor David Condon and City Council President Ben Stuckart issued a statement. "We... take very seriously the concerns raised regarding the chair of the independent citizen police ombudsman commission." The city is checking to see if she has violated any policies.

Dolezal also has spoken about multiple alleged racist threats made against her, including nooses found near her home. But police never have been able to substantiate them, KXLY reported.