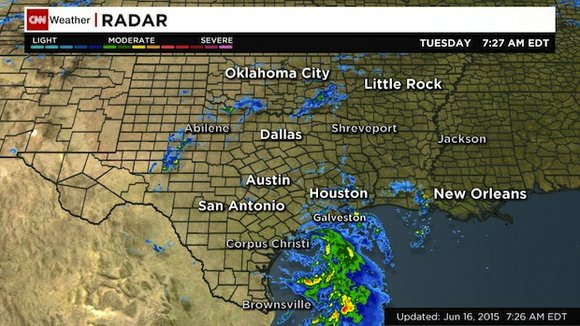 Still reeling from record rainfall in May, Texas is back in the bull's-eye as Tropical Storm Bill closes in on the Texas Gulf coast Tuesday morning, June 16, 2015. Wind gusts will top 50 mph, but it's the rain that has authorities worried. The storm is expected to dump 4 to 8 inches in eastern Texas and up to 12 inches in isolated areas.

By Ed Payne and Ralph Ellis

The storm system is expected to dump 4 to 8 inches in eastern Texas and Oklahoma, with up to 12 inches in isolated spots in Texas. Western Louisiana and Arkansas are expected to see up to 4 inches of rain.

The rain is bad news for a state recovering from last month's record-setting rains and flooding.

"While high winds and even tornadoes are possible, already wet grounds mean that even a moderate amount of rain will likely cause street flooding," warned Harris County Emergency Management. "Bayous and rivers could go out of banks quickly, creating a serious threat to life and property."

"This is a rain event," said Harris County Judge Ed Emmett on CNN's "New Day." "People need to be aware that places that have flooded before are likely to flood again."

Harris County is home to Houston, the state's most populous city.

In neighboring Galveston County, authorities issued a voluntary evacuation for the Bolivar Peninsula, which sits in Galveston Bay. Potential rainfall could flood roads on the peninsula, making it harder to leave later or for emergency responders to reach the area.

Residents rushed to grocery and hardware stores, clearing the shelves of bottled water, batteries and booze.

"We bought the essentials for the storm," a Sam's Club shopper told CNN affiliate KTRK. "We got water, liquor and beer."

People in Central Texas worry the storm may bring another round of deadly flooding. In Wimberly, floods along the Blanco River killed at least nine people and destroyed dozens of homes.

"Everyone's a little gun-shy," Lisa Kiefer told CNN affiliate KXAN. "Three weeks ago, after the flood, helicopters were in town for days, and the Red Cross trucks ... you just couldn't get away from the fact the community was so damaged."

Dozens of school systems along the coast called off classes for Tuesday, including the Houston and Galveston Independent School Districts.

Texas put its special operations center on alert ahead of the storm's landfall.

Along the Gulf, the U.S. Coast Guard mobilized too.

"We got all of our helicopters, aircraft and boats in ready status," Lt. Eric Vryheid, a U.S. Coast Guard pilot, told affiliate KRIS.

"We're taking the storm seriously," said Vryheid. "We urge that the community takes it seriously as well. We don't want anyone getting caught in an unsafe situation."

Foresters say Tropical Storm Bill will quickly weaken after coming ashore Tuesday. It will linger in the region through Wednesday.

The heaviest rainfall will soak eastern Texas and Oklahoma -- 4 to 8 inches will be the norm. Parts of western Louisiana and Arkansas will see 2 to 4 inches.

The state has barely recovered from May's record-setting rainfall.

Torrential rains dumped 37.3 trillion gallons of water on the state during the month, enough to cover the entire state with 8 inches of water, according to the National Weather Service.

Last month's storms killed at least 43 people in the United States and Mexico.

CNN's Mariano Castillo and Kevin Conlon contributed to this report.