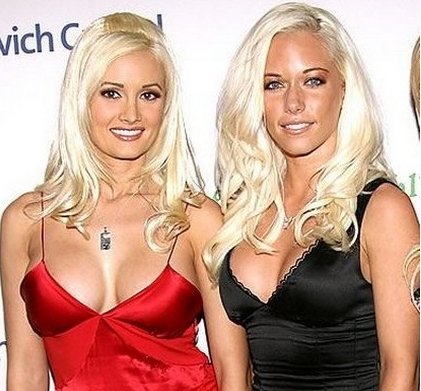 (CNN) -- Former Playboy Bunnies Holly Madison and Kendra Wilkinson, whose lives as Hugh Hefner's girlfriends were featured in "The Girls Next Door" reality show, are feuding after Madison shared the claims of their less-than-glamorous life in the Playboy Mansion.

The pair were two of Hef's many girlfriends for a bit and starred as two of his three main live-in squeezes during the E! reality series, which ran for five years starting in 2005.

Wilkinson said Madison's negative portrayal of Hef in her new book, "Down the Rabbit Hole: Curious Adventures and Cautionary Tales of a Former Playboy Bunny," is based on her jealousy over him not marrying her.

"Holly, you can tell, had this ulterior motive every minute being at the Mansion, and that motive was -- it was clear as day -- she wanted Hef's kids, she wanted a piece of Playboy and she wanted to marry Hef for, obviously, his will," Wilkinson told People magazine.

Madison made no secret of her desire to marry Hefner and have children during their time together, and he made no secret of his aversion to marriage. "I love Holly very much and I think we're going to be together the rest of my life," Hefner said in 2008. "But marriage isn't part of my puzzle. It's not a personal thing; I just haven't had much luck with marriages."

Meanwhile, Madison claimed Wilkinson's now-husband Hank Baskett was actually into Playmate Kayla Collins. Now, Wilkinson, who has starred in her own reality series "Kendra on Top" and "Watch it with Kendra and Hank," has faced her own troubles with Baskett's cheating on her with model Ava Sabrina London.

Hefner addressed Madison's allegations in a statement to US Weekly. "Over the course of my life I've had more than my fair share of romantic relationships with wonderful women," Hefner said. "Many moved on to live happy, healthy, and productive lives, and I'm pleased to say remain dear friends today. Sadly, there are a few who have chosen to rewrite history in an attempt to stay in the spotlight. I guess, as the old saying goes: You can't win 'em all!"

Hefner's son, Cooper, took to Twitter to defend his dad: "How does a person who is famous for being a gold digger paint themselves as a victim of a relationship they aggressively sought out for?"

Introduced to Hefner by a friend, Madison was a 22-year-old Hooters waitress and college dropout when she got her first invitation to go clubbing with the Playboy mogul and several Playmates.

Watching him and the other women in the dance floor, " 'Oh, my God,' I thought, genuinely mortified for him," Madison wrote. "Had no one told him how silly he looked? I felt a bit sorry for him dancing around like the punch line to a bad joke. Back then, he seemed like such a sweet man to me, and this felt unnecessarily cruel."

Hefner offered her Quaaludes at the dance club, which she declined, she wrote.

The girls always headed back to the house afterwards. "As Tina (another partygoer) led me into the bedroom, I stumbled over and weaved through massive piles of junk covering the floor," Madison wrote. "Ceiling-high piles of videotapes, stuffed animals, art and gifts littered the room. It was like an episode of 'Hoarders.' "

After Madison moved into the mansion, she had to follow a 9 p.m. curfew on non-club nights, not talk to the male staff, not have an outside job and never wear red lipstick, she said. And when she was feeling depressed and asked Hefner whether she could see a psychiatrist, he refused, she said. So she went on her own, without telling him.

Madison left Hefner in 2009 and went on to compete in another reality show, "Dancing with the Stars." She eventually had a daughter with businessman Pasquale Rotella and married him in 2013.