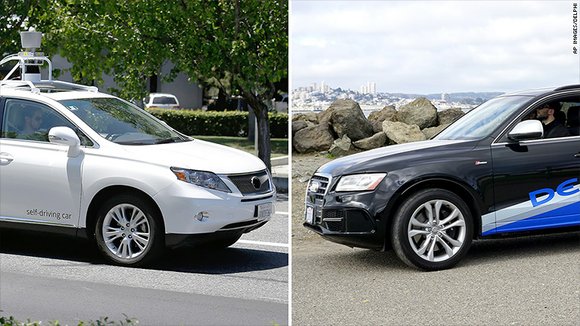 Google's self-driving Lexus, left, and Delphi's self-driving Audi, right, came close to colliding when they found themselves on the same street earlier this week.

NEW YORK (CNNMoney) -- There are few drivers who haven't experienced what it's like to be cut off by another motorist who nearly causes an accident. Now, two autonomous-driving cars from competing companies have matched that common human experience.

Of course, the self-driving cars weren't able to give each other the finger after it happened.

Delphi disclosed the incident to a Reuters reporter earlier this week and confirmed it to CNNMoney Friday. Spokeswoman Kristen Kinley insists it wasn't truly a near miss but was instead an example about how self-driving cars effectively avoid accidents.

"Our car saw the Google car move into the same lane as our car was planning to move into, but upon detecting that the lane was no longer open it decided to terminate the move and wait until it was clear again," she said.

Google did not respond to a request for comment about the incident.

Self-driving cars are allowed on streets and highways in California, but they are required to have a human driver sitting behind the steering wheel able to take over control of the car if there is a problem. The cars are not yet for sale to the public. The self-driving vehicles now on the roads are being used by companies that are developing the technology.

Self-driving cars have been involved in a number of minor accidents with traditional driver cars during the last few years that they were being tested on the road. Google has driven the cars more than 1 million miles in autonomous driving mode. It says it has had 12 accidents. Most occurred when the autonomous driving car was stopped or nearly stopped and were struck from behind by a car with a driver.

There was a human driver sitting behind the wheel in all the cases, and in instances where the car was in motion when the accident occurred, the human driver took control of the car.