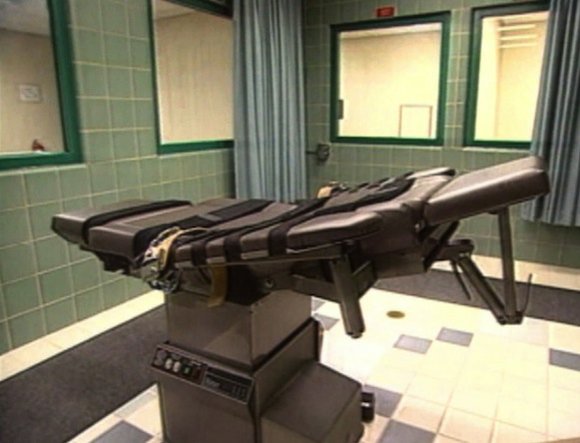 A lethal injection room at an unidentified prison.

WASHINGTON (CNN) -- The U.S. Supreme Court on Monday upheld the use of a controversial drug for lethal injection in executions, but opened a larger question about capital punishment when two justices in the minority newly questioned whether the death penalty violates the Constitution.

The ruling in the execution drugs case was 5-4 with Justice Samuel Alito writing for the majority, along with Chief Justice John Roberts, Justices Antonin Scalia, Anthony Kennedy and Clarence Thomas.

"The prisoners failed to identify a known and available alternative method of execution that entails a lesser risk of pain, a requirement of all Eighth Amendment method-of-execution claims," Alito wrote. "Second, the District Court did not establish that Oklahoma's use of a massive dose of midazolam in its execution protocol entails a substantial risk of severe pain."

The main dissent was written Justice Sonia Sotomayor, but in a separate dissent, Justice Stephen Breyer raised the question of whether the the court should revisit the death penalty. He was joined by Justice Ruth Bader Ginsburg.

Read the opinion: Supreme Court upholds use of lethal injection drug "I would ask for a full briefing on a more basic question: whether the death penalty violates the constitution," Breyer wrote.

Breyer was answered directly by Justice Antonin Scalia, who wrote a concurring opinion specifically to refute his colleague.

"Welcome to Groundhog Day," Scalia wrote, suggesting he has heard these arguments before.

"We federal judges live in a world apart from the vast majority of Americans," Scalia wrote in reference to Breyer's suggestion that data does not show a deterrent effect from the death penalty. "After work, we retire to homes in placid suburbia or to high-rise co-ops with guards at the door. We are not confronted with the threat of violence that is ever present in many Americans' everyday lives."

In an extremely rare occurrence, four separate justices read opinions from the bench. Court watchers said the public debate reflected something new at the Supreme Court.

"Separate from the questions the Court decided in this case, the fight between Justices Breyer and Scalia over the constitutionality of capital punishment itself is remarkable in any number of respects," said Steve Vladeck, a law professor at American University and CNN contributor. "Although previous Justices---including Justices Blackmun and Stevens---have objected to the death penalty, they did so late in their careers, at a point at which it was more a moral statement than a legal one. Here, in contrast, the Court's two senior progressive Justices, who don't seem to be going anywhere anytime soon, have opened the door to frontal assaults on the death penalty---and, in doing so, have provoked the ire, sarcasm, and perhaps fear, of the Court's conservative lion."

The Supreme Court re-instated the death penalty in 1976 after having suspended it earlier in the 1970s. Capital punishment is now used in 31 states and by the federal government.