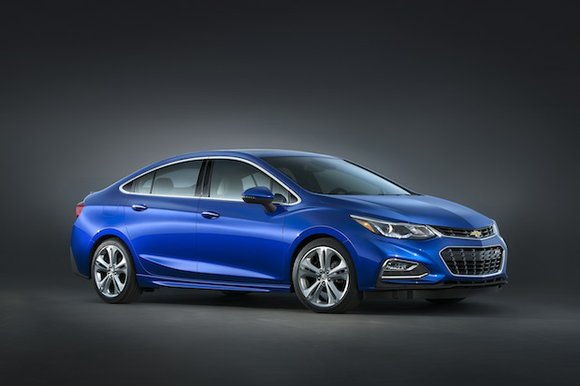 Packed with new technologies such as available Android Auto, Apple CarPlay and new active safety features, as well as a more spacious interior and an athletic, aerodynamically optimized design, the 2016 Cruze elevates the compact car segment – from San Francisco to Shanghai and from Boston to Buenos Aires.

It will be offered in more than 40 global markets and goes on sale first in North America in early 2016. A new, standard 1.4L turbocharged engine with direct injection and an SAE-certified 153 horsepower (113 kW) helps enable a General Motors-estimated 40 mpg on the highway with the available six-speed automatic transmission. Stop/start technology helps enhance the Cruze’s efficiency in stop-and-go driving.

The new turbo engine and a leaner architecture that reduces up to 250 pounds (113 kg) also contribute to the new Cruze’s stronger performance, with expected 0-60-mph acceleration of eight seconds.

“The 2016 Cruze builds on a very successful program that introduced Chevrolet to new customers the world over,” said Alan Batey, president, General Motors North America. “We retained all the attributes that made the original Cruze a hit around the globe and built on them to make this car more sophisticated, more fun and more Chevrolet.”

“The new Cruze is truly one of Chevrolet’s most global vehicles,” said Batey. “With content variations dictated mostly by local market demands, customers in every corner of the globe will enjoy the same fundamental dynamics that are making Chevrolet one of the fastest-growing brands around the world.”

In 2017, Chevrolet will introduce a new diesel model for U.S. customers that builds on the success of the current Cruze diesel model.

The 2016 Cruze’s expressive design balances the designers’ inspiration and the efficiency-optimizing input of wind tunnel testing – leveraging the aero experience of vehicles including the Volt. The result is one of the sleekest-looking cars in the class, with a 0.29 coefficient of drag – an attribute that contributes directly to a GM-estimated 40 mpg on the highway.