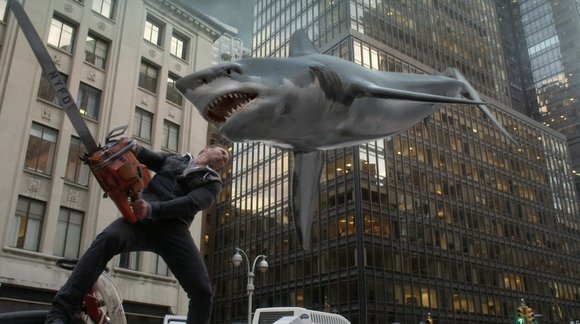 (CNN) -- Say what you will about the "Sharknado" franchise, but there's no doubt, it's swimming in irony.

Take a couple of a key casting choices announced this week.

"Shark Tank" star and Dallas Mavericks owner Mark Cuban will play the President of the United States in "Sharknado 3."

Care to venture a guess on his Veep? Try political commentator Ann Coulter.

Yes, there actually is one, or as much as there's ever been one.

This time around a sharknado will tear into in the nation's capital, before roaring down the Eastern Seaboard and into Florida.

Anyone taking bets on how long Cuban and Coulter will last?

The first two "Sharknado" films churned up a storm of laughs and flooded the Twitterverse with clever one liners.

Sharknado2TheSecondOne was the top-trending hashtag on Twitter the night it first aired.

"No sharks were harmed or actors paid in the filming of Sharknado 2," said Annie B.

"#Sharknado2 was filmed in just 18 days," tweeted comedian Jeff Dwoskin. "Credit to everyone, it totally looks like a 24 day shoot."

There are a raft full of D-list celebrities in this one.

Back are regulars Ian Ziering as Finley "Fin" Shepherd, and Tara Reid as April Wexler.

And a few other tasty offerings.

And Jerry Springer appears as Mr. White, a manic tourist.

With this cast, things should go swimmingly.