Netanyahu: I 'deeply regret' my speech is seen as political 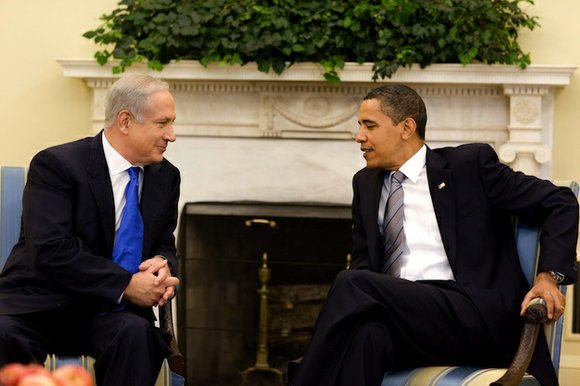 WASHINGTON (CNN) -- Israeli Prime Minister said Tuesday he deeply regretted that his speech to the U.S. Congress was being seen as a political ploy, opening remarks in which Israeli officials say he will reveal information that proves a proposed deal on the table between world powers and Iran could eventually leave Tehran able to break out to a nuclear weapon in as little as six months.

Netanyahu walked into the House to a hero's welcome, as lawmakers stood and cheered for a highly controversial speech that comes during an ugly spat between the Israeli government and President Barack Obama, who has made clinching a deal with Iran a central piece of his political legacy.

"I deeply regret that some perceive my being here as political," Netanyahu said, in an attempt to defuse the tensions with the White House, adding that he will "always be grateful" to Obama for his support to Israel, including much that will never be known for national security reasons.

Top U.S. officials have sternly warned Netanyahu not to reveal secret details of the talks, which are entering a crucial final stage, warning such revelations could have a disastrous impact on hopes for a deal.

"I am confident we have an inclusive and comprehensive picture of what is going on," Intelligence minister Yuval Steinitz told CNN, though he declined to elaborate on the source of the information other than to say it was not from American or "other sources."

CNN's Elise Labott reported that Netanyahu will argue that the size of the enrichment program that Iran could be allowed to keep under the deal, reportedly around 6,000 centrifuges, and its demand to retain a research and development program on more advanced nuclear technology could reduce the time that it would take to race towards a bomb to less than a year if it decided to make one. The Obama administration says its goal is to freeze Iran's program to ensure that breakout time is a year or more to ensure the world has time to act should Tehran cheat on an agreement.

Netanyahu will also warn that a research and development program that Iran is demanding the right to keep could help it enrich uranium, the key ingredient for a nuclear bomb, could allow it to break out in as little as six months, Israeli officials said.

Sources close to the negotiations in Geneva, however, told CNN's Jim Sciutto that the provision regarding more than 6,000 centrifuges is just one of the options on the table of the deal. The sources also said the advanced research program being contemplated would not allow Tehran to build advanced centrifuges that would help it shorten the breakout time.

White House spokesman Josh Earnest warned on Monday that any revelations using sensitive information would be "betray the trust between our allies."

"That would be true even if the -- these sources were to claim that they had obtained the information from somewhere else," Earnest said.

The speech, which was organized by House Republican Speaker John Boehner without the White House's prior knowledge, has already fueled a bitter domestic political row, and the fallout from any shared intelligence details could result in a more fundamental break between Israel and the U.S. Relations have already plunged to the lowest levels for years over the disagreement over Iran.

"The release of that information would betray the trust between our allies, and it certainly is inconsistent with the behavior of trusted allies," White House spokesman Josh Earnest said Monday.

Obama isn't expected to watch Netanyahu's address. Instead, he'll be meeting with several of his European counterparts via video conference to discuss the situation in Ukraine, the White House announced Tuesday.

California Sen. Dianne Feinstein, the top Democrat on the intelligence committee, told CNN that she hadn't been told what would be in the speech but that she was concerned. One GOP senator said Israeli officials had described the address as containing "something we have never heard before."

Obama bluntly said Monday that Netanyahu had been proven wrong about his diplomatic initiative before, telling Reuters that Netanyahu has in the past made "all sorts of claims" about the deal and that "none of that has come true."

And Kerry, who is meeting his Iranian counterpart Javad Zarif in Switzerland cautioned against Netanyahu revealing sensitive details of the negotiations.

"I want to say clearly that doing so would make it more difficult to reach the goal that Israel and others say they share in order to get a good deal," Kerry said.

Zarif told CNN Tuesday that Netanyahu was trying to disrupt the talks. "I don't think trying to create tension and conflict helps anybody," Zarif said.

Netanyahu's aides say that Tuesday's speech represents the last chance for Israel to register its dismay at the proposed deal, ahead of a late March deadline for a political framework to be reached between the parties, so it is vital that he explains to lawmakers what is in the draft. But senior Israeli officials also said that senior Democrats have asked Netanyahu not to use any rhetoric that would embarrass the president. More than 50 Democratic lawmakers are boycotting the Netanyahu speech.

'A bad deal is worse than no deal'

"I want to be very clear. A bad deal is worse than no deal. If that is the choice, there will be no deal."

Rice also said that Israel's insistence that Iran must stop all enrichment of uranium was unrealistic and took a clear shot at Netanyahu on the eve of his speech.

The appearance on Capitol Hill amounts to a highly unusual case of a foreign leader, who has a fraught relationship with Obama, effectively deciding to side with Republicans in an effort to derail a potentially historic initiative that is one of the president's top remaining priorities.

"The purpose of my address to Congress," Netanyahu told the AIPAC on Monday "is to speak up about a potential deal with Iran that could threaten the survival of Israel."

"I plan to speak about an Iranian regime that is threatening to destroy Israel, that's devouring country after country in the Middle East, that's exporting terror throughout the world and that is developing, as we speak, the capacity to make nuclear weapons, lots of them," Netanyahu said.

The Obama administration says that a deal could verifiably freeze Iran's nuclear program for at least a decade and stop it short enough of developing a weapon for the world to have time to act if it cheats on the agreement.

A deal that falls short?

Netanyahu however, argues that only an agreement that completely dismantles Iran's entire nuclear infrastructure and materials is acceptable, and believes the one on the table falls far short of that demand.

Despite the fierce fight over his speech and a partial Democratic Party boycott, Netanyahu insists that he is not meddling in U.S. politics and says he respects Obama despite the personal and political gulf between them.

But his decision to accept the invitation from Boehner has exacerbated a fierce disagreement over Iran and sent political ties between the U.S and Israel tumbling into their deepest crisis in years. Rice has branded Netanyahu's visit "destructive."

Despite the escalating dispute over the possible future deal, Earnest said on Monday that it was still far from certain that one would emerge.

"Our likelihood of success when it comes to reaching a deal in the context of these negotiations is only at best 50-50. There are difficult decisions that need to be made by the Iranian government in terms of their willingness to sign onto this agreement. And the president has made clear that he is not going to sign a bad deal."

Earnest also said that Obama had not watched Netanyahu's speech to AIPAC and that he doubted the president would tune in on Tuesday when he goes to Congress. In a pointed show of administration pique over the address, Vice President Joe Biden, who normally would attend, is in Guatemala.

Despite the warnings from the State Department and harsh words from the president, the White House did try to tamp down the flaring tensions in addresses by Rice and U.S. Ambassador to the U.N. Samantha Power to AIPAC Monday and in delivering several administration statements of support for the U.S.-Israel relationship.

Still, the President will not be meeting with Netanyahu as is customary, or even speak to him by phone. U.S. officials say that is because a meeting between Netanyahu and the President could be construed as an attempt by Washington to interfere in Israel's general election on March 17.