Echoes of Selma: Is MLK's greatest victory being undone? 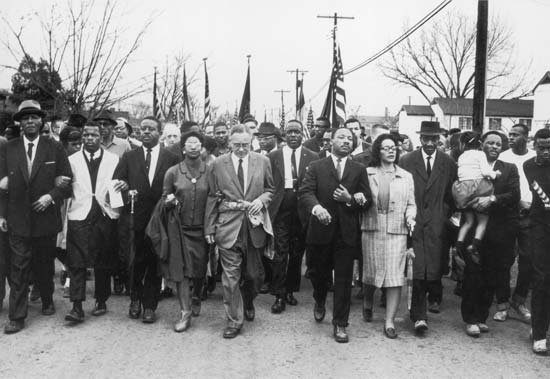 Martin Luther King, Jr. and others marching for voters' rights

(CNN) -- They never linked arms to sing "We Shall Overcome." No one smacked them on the head with a club for trying to vote. They didn't march into a phalanx of armed state troopers who beat them like animals.

But the forces that mobilized against demonstrators in Selma, Alabama, 50 years ago launched a movement of their own that relied on an audacious strategy: They blew a hole through the civil rights movement's most revered law by borrowing the same tactics protesters used in Selma.

When President Barack Obama and civil rights veterans gather this weekend to celebrate the 50th anniversary of the Selma campaign, many people will focus on the pivotal moments that sparked the passage of the 1965 Voting Rights Act, once known as the "crown jewel" of the movement.

Yet less is known about the long-term campaign that was launched against the Voting Rights Act just weeks after its passage. That campaign culminated in 2013 when a conservative majority on the U.S. Supreme Court dismantled the law's most effective weapon against racial discrimination in voting.

The court's decision -- in Shelby County, Alabama v. Holder -- spawned the most systematic effort to restrict voting since the rise of Jim Crow segregation in the late 19th century, says Ari Berman, a voting rights expert and a writer for The Nation magazine.

"The jewel has been smashed," Berman says of the voting law. "The act is in tatters."

Others, though, say the Voting Rights Act wasn't gutted, just refined. All Shelby did was render Section 5 of the law obsolete. Section 5 was a provision that required states with the worst record of voting discrimination to get permission from federal officials before introducing any voting changes.

"It wasn't us," says Hans A. von Spakovsky, a senior legal fellow with the Heritage Foundation in Washington, when asked how he and others changed the voting law. "It was the fact that times have changed and there simply was no longer any evidence that the special provisions of Section 5 were needed."

Times may change, but the lessons of Selma are timeless. Here are three ways that some historians say opponents of the Voting Rights Act flipped the script on protesters in Selma.

When people talk about the "Selma movement," they typically get the dates wrong. Many think the Selma campaign was confined to a couple of months in early 1965: the arrival of the Rev. Martin Luther King Jr.; the "Bloody Sunday" march on the Edmund Pettus Bridge; the Selma-to-Montgomery march capped by King's triumphant speech.

Yet the Selma campaign for voting rights had been going on since the 1920s, when black residents in the town formed the Dallas County Voters League. Over the years, other civil rights groups like the NAACP and the Student Nonviolent Coordinating Committee entered Selma for the same purpose. Some blacks were so angry over being denied the right to vote through a combination of literacy tests, poll taxes and raw violence that they had been risking their jobs, their homes and even their lives for years.