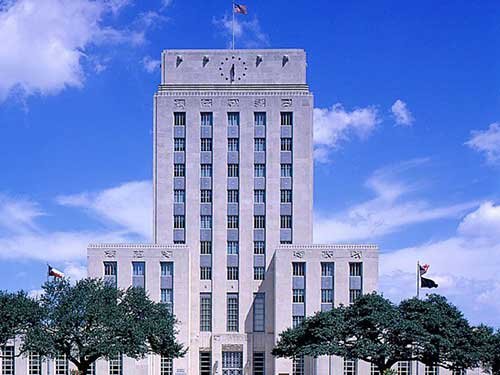 With Spring Break starting next week Houston City Hall candidates for mayor, city controller and city council are starting to file into Houston City Secretary Anna Russell’s office to fill out the paper work naming their campaign treasurers as required by Texas law and the city charter before starting to campaign, fund raise and spend funds.

State Rep. Sylvester Turner named David Mincberg, Chairman and Chief Executive Officer of Flagship Properties Corporation, a Houston real estate investment firm, as his treasurer but more critical Mincberg is a former Harris County Democratic Party Chair. Turner, a baseball fan, has scheduled his official kick-off for his campaign to be Houston’s next mayor for Saturday, March 28th at Minute Maid Field and has moved nearly $1million from his state legislator campaign account to a campaign account for mayor and is considered the frontrunner.

Former Houston City Council Member and one term Congress Member Chris Bell had a kick off for mayor recently and in some polls is second to Turner.

Former Kemah Mayor Bill King had announcements this past week in the Clear Lake area where he grew up and in other areas around the city to kick-off his campaign for Houston mayor. King is a Houston Chronicle columnist and recently served as the lead in one of the country’s largest delinquent tax collection firms where he worked with Paula Arnold. Arnold, a former Houston ISD Trustee, is his treasurer.

Former Houston City Attorney Ben Hall ran two years ago in what was considered by many among the worst campaigns in city history. Hall recently invested in KCOH radio ownership and in television and has had some signs put up in some areas. He named himself as his own treasurer and has pulled back on campaigning.

Houston City Council Member Steve Costello has not filed a treasurer for mayor yet but has scheduled a March 12th fundraiser for mayor filled with fellow Republican philanthropists, public contractors and engineer vendors on the flyer.

Harris County Sheriff Adrian Garcia is expected to announce but when he does he is required to resign from being sheriff so his running remains a guessing game.

Jan Clark has filed a treasurer to challenge Jack Christie for at large position 5 as is Durrell Douglas expected to do so this month.