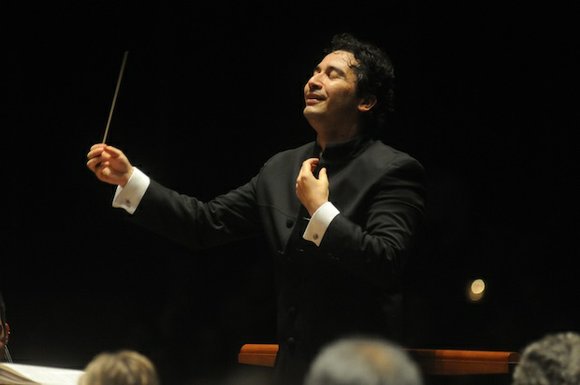 Verdi’s Requiem Mass is the composer’s only large-scale sacred composition, which he wrote despite his own agnosticism to honor the memory of his close friend and renowned Italian poet and novelist Alessandro Manzoni in the aftermath of his death. The magnificent Requiem made its debut in May 1874, the first anniversary of the cultural icon’s passing and less than a decade after the final war of Italian Independence. This masterpiece takes audiences on a powerful spiritual journey, evoking with striking emotional honesty both terror in the face of death and yearning for the peace of heaven.

“Verdi’s Requiem is full of emotions; from the powerful solo voices to the enchanting choral moments. It’s as enjoyable and fascinating to hear it and watch it as it is to understand the musical and political events and historical complications that led to the composer’s masterpiece,” said Music Director Andrés Orozco-Estrada. “Houston audiences won’t be disappointed as they’ll get to see a handful of dramatic operatic elements go hand in hand with the angelic voices of the chorus and soloists along with subtle, sublime melodies.”

Verdi’s Requiem will feature Grammy-Award winning mezzo-soprano and The Woodlands resident Sasha Cooke, celebrated American soprano Amber Wagner, rising Metropolitan star Francesco Demuro and New Orleans native and versatile bass-baritone Alfred Walker. These acclaimed soloists will be joined on stage by members of the Houston Symphony Chorus under the direction of Chorus Director Betsy Cook Weber. All vocal soloists with the exception of Cooke will be making their Houston Symphony debuts that weekend.

Unless otherwise noted, all concerts take place at Jones Hall for the Performing Arts, 615 Louisiana Street, in Houston’s Theater District. For tickets and information, please call (713) 224-7575 or visit www.houstonsymphony.org. Tickets may also be purchased at the Houston Symphony Patron Services Center in Jones Hall (Monday – Saturday from 10 a.m. to 6 p.m.). All programs and artists are subject to change.

Andrés Orozco-Estrada, born in 1977 in Medellin, Colombia, and trained in Vienna, is one of the most sought after conductors of his generation. He begins his tenure as the Houston Symphony’s 15th Music Director in September 2014.

He began his musical studies in violin and had his first conducting lessons at age 15 when he was asked to lead the youth orchestra of his school. At 19 years old, Orozco-Estrada went to Vienna in pursuit of furthering his studies of music.

He entered the renowned Vienna Music Academy, where he studied with Uroš Lajovic, a pupil of the legendary Hans Swarowsky (student of Felix Weingartner, Richard Strauss, Schoenberg and Webern) and completed his degree with distinction, conducting the Vienna Radio Symphony Orchestra at the Vienna Musikverein. Currently, Orozco-Estrada is the Music Director of the Tonkünstler Orchestra, which also performs at the Vienna Musikverein, a position he will relinquish in the summer of 2015.

Orozco-Estrada is a dynamic conductor, intensely musical, technically consummate, and detailed in his preparation and rehearsals. In concert, he radiates on the podium and has a special talent for sharing his admiration of music with his audience. With a South American heritage and European training steeped in the Viennese tradition, Orozco-Estrada is particularly noted for his performances of classical and Romantic Central European symphonic repertoire. He is also passionate about innovative concert formats and the performance of contemporary music, choral works, and opera. A natural communicator, Orozco-Estrada is fluent in Spanish, German and English. He is the Houston Symphony’s first Hispanic music director.

Orozco-Estrada made his debut with the Vienna Philharmonic in the Musikverein in 2010 replacing Esa-Pekka Salonen, and in 2012 he returned to replace Riccardo Muti. Both performances received critical praise with Orozco-Estrada proclaimed a “brilliant stand-in” (Wiener Zeitung), an “eminent talent” (Die Presse), “stand-in worth his weight in gold” (Kurier) and “an inspired master of communication” (Der Standard). These Vienna Philharmonic engagements have resulted in Orozco-Estrada being invited to conduct the orchestra again during the 2015-16 season. Over the past two years, he has conducted highly successful prominent European orchestras including the Munich Philharmonic, Leipzig Gewandhaus Orchestra, City of Birmingham Orchestra, Orchestre National de France, Mahler Chamber Orchestra, Santa Cecilia Orchestra in Rome, Royal Stockholm Philharmonic, and Gothenburg Symphony Orchestra, among others. Highlights of the 14/15 season include debuts with the Pittsburgh Symphony Orchestra, Royal Concertgebouw Amsterdam and Oslo Philharmonic Orchestra.

American soprano Amber Wagner is a winner of the 2007 Metropolitan Opera National Council Auditions Grand Finals and was featured in the 2009 documentary The Audition. She was chosen by OPERA NEWS as one of 25 artists poised to become a major force in classical music in the coming decade.

This season includes returns to Lyric Opera of Chicago as Leonora in Verdi’s Il trovatore, a role debut, then as Elisabeth in Wagner’s Tannhäuser. She sings Verdi’s Requiem in this debut with the Houston Symphony, another with the Toronto Symphony Orchestra and her return to the Nice Philharmonic Orchestra.

Wagner has performed from Melbourne to Teipei, from New York to Spokane, from Nice to Guadalajara. Highlights from past operatic seasons include her European debut with the Prague State Opera performing Brangäne in Wagner’s Tristan und Isolde and performances with Lyric Opera of Chicago as Elsa in Lohengrin; she performed the same role for her debut at the Savonlinna Opera Festival.

Grammy Award-winning mezzo-soprano Sasha Cooke frequently sings Mahler and Berlioz, composers whose works she has sung to great acclaim on four continents. She is sought after by the world’s leading orchestras, opera companies and chamber music ensembles for her versatile repertoire and commitment to new music.

In addition to this engagement, this season’s symphonic engagements include performances of Berlioz’ Roméo et Juliette with the Deutsches Symphonie-Orchester, Mahler’s Third Symphony with the Melbourne Symphony Orchestra, Handel’s Messiah with The Philadelphia Orchestra, Beethoven’s Missa Solemnis with the San Francisco Symphony, and Mozart’s Requiem with the Colorado Symphony and the Seattle Symphony. In recital, she appears with pianist Julius Drake at Carnegie Hall.

She also performs the world premiere of Laura Kaminsky’s As One at the Brooklyn Academy of Music, a piece commissioned for her and baritone Kelly Markgraf by American Opera Projects. She also performs Joby Talbot’s Everest with The Dallas Opera and the role of Anna in Les Troyens at San Francisco Opera. In Houston, she performs a world premiere by Pierre Jalbert with the River Oaks Chamber Orchestra.

Francesco Demuro, who debuts with the Houston Symphony with these performances, was born in Porto Torres, Sardinia, in 1978. He studied at the State Conservatory of Music in Sassari before studying in Cagliari as a private student with soprano Elisabetta Scanu. His U.S. debut came in 2009 when he sang La traviata at the Seattle Opera to great acclaim. That was followed by three productions at the San Francisco Opera (Rigoletto, Così fan tutte, Falstaff). He performed Lucia di Lammermoor in Hamburg and Warsaw, La traviata and Der Rosenkavalier in Dresden, L’elisir d’amore in his La Scala debut, Don Pasquale at Champs Elysées, La traviata at Opéra Bastille, L’elisir d’amore and La bohème at the Vienna State Opera, among others.

Demuro enjoyed popular and critical acclaim in Verona where he opened the summer season with La traviata, and for his debut at London’s Royal Opera House in Gianni Schicchi; both garnered repeat invitations. Recent performances include, Roméo et Juliette in Seoul, La bohème in Frankfurt, La tra- viata in Cagliari, as well as the important debuts at the Metropolitan in New York (La bohème and La traviata) and at La Fenice in Venice (La traviata). Future plans include: Rigoletto at Opéra Bastille and in Madrid, La traviata in Munich, Madrid and Barcelona, Maria Stuarda at Champs Elysées in Paris and at Opéra de Monte Carlo, and Falstaff at La Scala.

In addition to this Houston Symphony debut, Alfred Walker returns to the title role of The Flying Dutchman in Caen and Luxembourg this season. He also sings the Four Villains in The Tales of Hoffmann at the Oslo Opera House, Verdi’s Requiem with the Louisiana Philharmonic Orchestra and Bluebeard’s Castle with the Metropolitan Opera.

The bass-baritone recently triumphed in the title role in The Flying Dutchman at Theater Basel and returned to the company for his first performances of Parsifal and Aida.

He is an equally versatile concert artist and has enjoyed engagements with the American, Atlanta and Boston Symphony Orchestras and the Los Angeles and New york Philharmonic orchestras, among others.

During the 2014-15 season, the Houston Symphony welcomed its new music director, Andrés Orozco-Estrada, and entered its second century as one of America’s leading orchestras. Founded in 1913, the Houston Symphony is one of the oldest performing arts organizations in Texas, and offers a full complement of concert, community, education, touring and recording activities. Serving the entire Greater Houston region, the Symphony’s home base is Jones Hall for the Performing Arts, and the orchestra also performs regularly in Sugar Land, at Miller Outdoor Theatre, Cynthia Woods Mitchell Pavilion and other locations around the community.

As a cultural ambassador for the city and region, the Houston Symphony has toured extensively, from early in its history through road tours to military bases in Texas and Louisiana during WWII, to more recent international appearances in Singapore, Moscow, and Japan, and European tours with stops in England, France, Holland, Germany and Austria, including 16 domestic performances at Carnegie Hall. Most recently, the Symphony embarked on a seven-city, eight-concert tour through the United Kingdom in 2010 performing The Planets – An HD Odyssey, to sold-out crowds.

Today, with an annual operating budget of $29 million, the full-time ensemble of 87 professional musicians is the largest performing arts organization in Houston, presenting more than 286 performances for 300,000 people, including 82,000 children, annually. For tickets and more information, please visit houstonsymphony.org or call (713) 224-7575, Monday-Saturday, 10am-6pm.