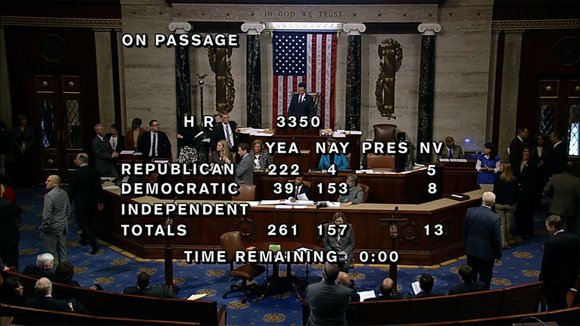 The GOP-controlled House voted 261-157 Friday, November 15, 2013, to approve a Republican bill giving health insurers the option of extending plans through 2014 that would otherwise be canceled for not complying with Affordable Care Act standards.

WASHINGTON (CNN) -- Nearly every Senate Republican has signed on to an open letter to Iran's leaders warning that without their approval, any Iran nuclear deal signed by President Barack Obama will be null and void after he leaves office.

The letter, authored by Arkansas Sen. Tom Cotton, states that the Constitution requires any international treaty to be ratified by a two-thirds vote in the Senate, and "anything not approved by Congress is a mere executive agreement." It also notes that presidents are barred from serving more than two terms in office and that the Obama administration ends in 2017.

"What these two constitutional provisions mean is that we will consider any agreement regarding your nuclear-weapons program that is not approved by the Congress as nothing more than an executive agreement between President Obama and Ayatollah Khamenei," the senators write. "The next president could revoke such an executive agreement with the stroke of a pen and future Congresses could modify the terms of the agreement at any time."

The letter is signed by 47 Republican senators, including every member of GOP leadership and all four the the chamber's potential presidential contenders: Sens. Rand Paul, Ted Cruz, Marco Rubio and Lindsey Graham.

Sens. Jeff Flake, Lisa Murkowski, Lamar Alexander, Dan Coats, Thad Cochran, Susan Collins and Bob Corker didn't sign the letter. Murkowski and Coats are the only two up for reelection, and Coats is rumored to be considering retirement.

Speaking on Fox and Friends on Monday morning, Cotton again insisted that congressional approval is necessary for any deal to last.

But he indicated that congressional approval might be tough to get, if the developing contours of the deal remain intact.

The Arkansas Republican said that the terms of the deal, including Iran's robust uranium enrichment capability and the possibility of a sunset in as little as ten years, make it "unacceptable, dangerous to the United States, and dangerous to the world."

Cotton appears to have slightly flubbed the wording on treaty ratification, however --- according to a 2001 Congressional Research Service Report, "it is the President who negotiates and ultimately ratifies treaties for the United States."

The Constitution does stipulate that the Senate plays a role in that process, however, by taking up a "resolution of ratification" that must pass with a two-thirds majority.

Despite the imprecise wording, the letter is intended to pressure the Obama administration to give Congress final approval over the developing deal with Iran over its nuclear program. A bipartisan group of senators is currently working to usher a bill to do just that through the Senate, but Democrats have said they won't move forward with the measure until the first deadline for the talks to bear fruit, at the end of this month.

The warning could have the added effect of further complicating already delicate talks between the two nations aimed at reigning in Iran's nuclear program.