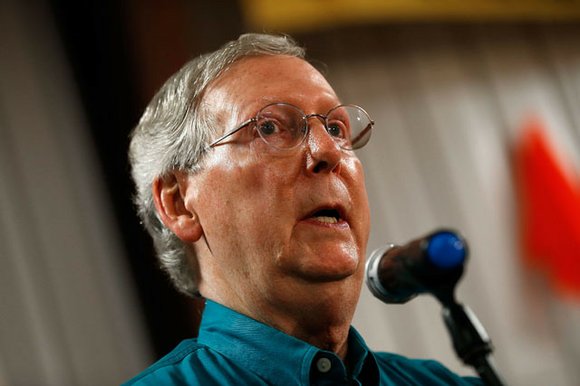 WASHINGTON (CNN) -- Senate Majority Leader Mitch McConnell pushed back strongly on Sunday against the outrage over Republican senators' letter to Iran, which he called a "manufactured controversy."

McConnell and 46 other Republican senators signed an open letter to Iran's leaders on Monday that became a magnet for criticism this week from President Barack Obama, Democrats and even some Republicans who rebuked the letter as an attempt to undermine negotiations.

But McConnell insisted the letter was in no way "unprecedented," as Obama and Secretary of State John Kerry have claimed, instead pointing to a "good case of selective outrage" and noting that, as a senator, Kerry met with Nicaraguan president Daniel Ortega, who was opposed by then-President Ronald Reagan.

"The President is about to make what we believe is a very bad deal. He clearly doesn't want Congress involved at all. And we're worried about it," McConnell told CNN's Dana Bash on "State of the Union" Sunday. "The president would like to keep us out of it. We know that."

"All of this is a distraction away from the point here," McConnell said.

McConnell deflected questions about whether the distraction was one of Republicans' own making or whether the letter politicized an issue on which lawmakers are trying to achieve bipartisan consensus.

Instead, McConnell repeated that the Obama administration is on the cusp or reaching "a very bad deal with one of the worst regimes in the world."

Kerry voiced his outrage this week at a Senate Foreign Relations Committee hearing and again in an interview that aired Sunday on CBS's "Face the Nation," calling it not only "unprecedented" interference, but inaccurate.

"It specifically inserts itself directly to the leader of another country saying, 'Don't negotiate with these guys because we're going to change this,'" Kerry said in the interview. "It is incorrect because they cannot change an executive agreement."

Kerry again insisted that Congress should not judge the deal until it is -- or isn't -- agreed to and insisted that the administration has been "in full discussion with Congress" on the progress of negotiations.

McConnell hasn't just been taking fire from the administration, but from lawmakers in Congress -- including some Republicans -- who worried that the letter would undermine bipartisan support for legislation that would require congressional oversight over an eventual deal.

But McConnell rebuked that notion on Sunday.

"Why would they use some dispute like this, some controversy like this...to get in the way of their judgment [on Iran's nuclear program]," McConnell said. "We're alarmed about it, a number of Democrats are alarmed about it -- we will be acting," he said.

The Senate will act on at least one of two bills after the end-of-March deadline for negotiators in Geneva to reach a preliminary agreement, McConnell said.

Sen. Bob Corker, chairman of the foreign relations committee, has introduced legislation with that committee's top Democrat, Sen. Bob Menendez, which would require the administration to run an accord through Congress. Menendez and Sen. Mark Kirk, a Republican from Illinois, have also introduced a bill that would ratchet up sanctions on Iran.

But Menendez and the cohort of Democrats supporting those efforts have vowed to hold off voting for those bills until after the March deadline.