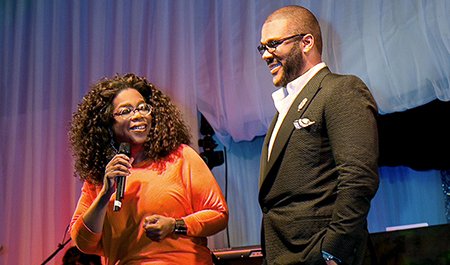 STAR-STUDDED PARTY CELEBRATING HIS OWN SERIES

In the upcoming OWN: Oprah Winfrey Network primetime television event, Tyler Perry hosts a star-studded evening at his home to celebrate the success of his historic programming partnership with Oprah Winfrey and to honor the talented and hardworking actors that bring all four of his popular television series to life week after week. The "Too Darn Hot Party" special airs Tuesday, March 17 at 10 p.m. ET/PT on OWN, immediately following "The Haves and the Have Nots."

"Too Darn Hot Party" offers an exclusive look behind the scenes of Tyler Perry's celebratory affair. From the intense pre-event planning to candid moments with celebrity guest attendees (such as Oprah Winfrey) to a surprise performance by superstar Mary J. Blige, Tyler grants OWN's cameras unprecedented access to document all of the festivities.

The special also includes fan videos, memorable scenes and interviews with cast members from Tyler's OWN shows, including "For Better or Worse," "Love Thy Neighbor," "The Haves and the Have Nots" and his newest drama, "If Loving You is Wrong," as well as reflections by other celebrities, including Oprah Winfrey, Jennifer Hudson, Stevie Wonder, Ava DuVernay, Iyanla Vanzant, Niecy Nash and Loretta Devine.