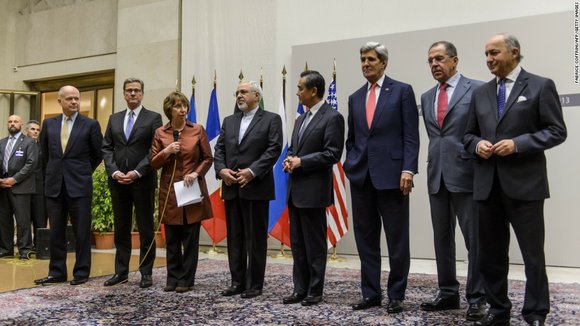 LAUSANNE, Switzerland (CNN) -- A major source of disagreement between Iran and world powers negotiating over Tehran's nuclear program -- what to do with its underground Fordo facility -- may be on a path to resolution.

There is a proposal that may allow Iran to run several hundred centrifuges at its Fordo site, but it would not be allowed to enrich uranium, according to a senior administration official and a Western diplomat. The centrifuges would only be used for non-nuclear purposes and fed materials for medical research. Iran has not accepted this yet and the sources described it as one of many options being discussed.

In a story first reported by the Associated Press, the sources said the amount of centrifuges that would be used at Fordo would be subtracted from the total number of centrifuges Iran was allowed to keep for enrichment at other sites. This may explain why the parties appeared to be assenting to 6,500 centrifuges earlier this month but now seem to be agreeing on a number closer to 6,000.

Even though the centrifuges would not be used to enrich uranium, the very fact the Iranians would be able to continue to operate Fordo is a major concession. In the beginning of the talks, the U.S. and Israel insisted that Fordo -- underground, protected from an attack and kept secret by Iran -- be shut down. As the talks progressed, the line became that they wanted to repurpose the facility to make sure Iran could not enrich there.

To leave the facility open with centrifuges running keeps open the possibility Iran could one day enrich there out of sight, although the sources said the facility would be subject to inspections.

The possible compromise on a major sticking point of the talks underscored international negotiators' optimism that a framework deal would by struck by next week's deadline.

"We can see a path forward here to get to an agreement," a senior administration official told reporters on the eve of a new round of talks. "We can see what that path might look like."

Although the discussions involve the so-called P5+1 -- the United States, Russia, China, France, Germany and Britain -- Kerry and Zarif have done much of the hard negotiating in recent months. The rest of the foreign ministers are expected to travel to Switzerland for final input if a deal looks close ahead of the March 31 deadline for a framework agreement.

Diplomats from all sides cited significant progress in the last several rounds that leads them to believe the remaining sticking points could be resolved before next Tuesday.

"Nobody wants to jinx it, but it feels like we are moving in the right direction," a Western diplomat said. "We feel positive and that there is a bit more momentum that we have a chance. It feels we are slowly getting where we need to be."

Diplomats say the main sticking points center around what kinds of limits should be imposed on Iran's research and development of nuclear technology, how quickly to suspend U.S. and United Nations sanctions and how long the deal should remain in effect.

Under discussion is what Iran would do to its centrifuges -- which enrich uranium, a process that can lead to nuclear weapons-grade material -- while the agreement limiting how many of them the country can have is in effect. The P5+1, and Israel, want Iran to dismantle this infrastructure. But Iran has said that is a non-starter.

"A clear issue is how quickly you can reverse this," one Western diplomat said. "We wouldn't want to sign anything where Iranians can flip a switch. It's all about the break-out time and building in enough time for us to be able to detect and reach" Iran's facilities if Tehran moves to build a nuclear weapon.

Under the deal, diplomats also said Iran's planned heavy-water reactor at Arak would be reconfigured to produce less plutonium than first envisioned -- eliminating another pathway to a bomb.

Iran wants the ability to continue to develop more advanced centrifuges, which can enrich uranium much faster than its current machines. U.S. and European officials worry that could enable Iran to quickly produce enough uranium for a nuclear weapon.

"You can't limit the number of centrifuges and then develop one that works 100 times faster." Another Western diplomat called this "one of the most critical and difficult issues."

Diplomats said the parties are closing in on 6,000 as a cap on the number of centrifuges. The figure is substantially more than the several hundred the United States had originally sought. Iran currently operates about 10,000 centrifuges but has around 19,000.

U.S. officials maintain that the number must be taken in context with other restrictions that will additionally limit the levels of enrichment and types of centrifuges Iran can operate. They believe that all of these measures taken together will extend the time Iran would need to have enough fissile material produce a number weapon -- known as the "break-out" time -- to at least a year.

Iran has been largely isolated by sanctions for years because of its nuclear program, one that its leaders say the country wants for peaceful purposes. Others, like the United States, have challenged that assertion and instituted the strict financial and trade restrictions, fearing that Tehran actually plans to develop nuclear weapons.

Discussions about the pace and scope of lifting sanctions has intensified in recent rounds of talks. Iran wants all sanctions lifted immediately once the deal goes into effect.

But Western diplomats say Tehran would only see unilateral sanctions relief in the areas of trade, oil and banking.

President Barack Obama has authority to lift some American sanctions immediately, but others would be phased out over time as Iran confirms its compliance to the deal, according to U.S. officials. Still other measures would need to be lifted by Congress.

Which sanctions on Iran would remain

Sanctions adopted by the United Nations are more complicated. Iran is eager to remove itself from a "chapter 7" sanctions regime -- which is binding under international law -- under the U.N. charter. While some could be eased early on, Western diplomats say other restrictions involving the transfer of missile technology would remain in effect until the U.N. nuclear watchdog, the International Atomic Energy Agency, certifies Iran is not seeking to build a nuclear weapon.

"Iran wants all U.N. sanctions lifted on day one. That can't happen because they contain important non-proliferation elements. And that is going to take a long time to address before we lift them," a western diplomat said, adding it could take "years."

Earlier this week, the head of the IAEA said his agency had made limited progress in determining that Iran's nuclear program did not have a military dimension and said more cooperation from Tehran was needed to prove that all of its nuclear material is being used for peaceful purposes. Western diplomats said IAEA certification that Iran did not have a military dimension to its nuclear program would be tied to U.N. sanctions relief.

The length of the deal also has yet to be resolved. Obama has said that any moratorium on Iran's nuclear program would need to last at least 10 years. France has called for 15 years, with another decade of restrictions on sensitive nuclear work and additional inspections for at least a decade. After the deal expires, Iran could theoretically return to its current nuclear activities.

Diplomats say verification of the deal, namely inspections, is another sticking point, but they point out that as a signatory to the Nuclear Non-Proliferation Treaty, Iran would be subject to inspections on its nuclear facilities.

Any framework agreement is unlikely to place curbs on Iran's missile program, which the U.S. and Israel fear could be used to create a delivery system for a nuclear warhead. But Iran has said including its missile program in the negotiations is off the table.

There is some disunity among the parties about whether they will continue to negotiate beyond Tuesday if a deal is not reached by then. While the parties set March 31 as a deadline for a political framework agreement, the interim agreement the sides reached in November 2013, known as the Joint Plan of Action, or JPOA, does not expire until June 30 -- the date for a comprehensive deal in which all specific details would need to be worked out.

To the U.S.'s great annoyance, France's Ambassador to the United States Gerard Arnaud on Twitter called March 31 an "artificial deadline" and called talk about needing a deal by that date "bad tactics" that are "counterproductive and dangerous." France has emerged as one of the more hawkish parties in the talks and has recently insisted on tougher restrictions on Iran.

But the Obama administration wants a framework deal to fend off U.S. lawmakers, who see March 31 as a critical date and are threatening to pass new sanctions if an initial deal is not reached by then. If that happens, Iran could walk away from the interim agreement and resume nuclear activity.

If a framework pact is reached, it is unclear whether it would be in writing. The U.S. wants a document that quantifies Iran's commitments to submit to Congress in an effort to prevent additional sanctions. But diplomats say Iran has resisted a formal agreement and is looking simply for an "understanding" before a formal accord is reached at the end of June.

Diplomats say the Iranian delegates have been tough negotiators, as expected, and that it remains to be seen whether they have made the strategic decision to abandon their nuclear ambitions. They say the round of talks this week will be key in determining Iran's seriousness.