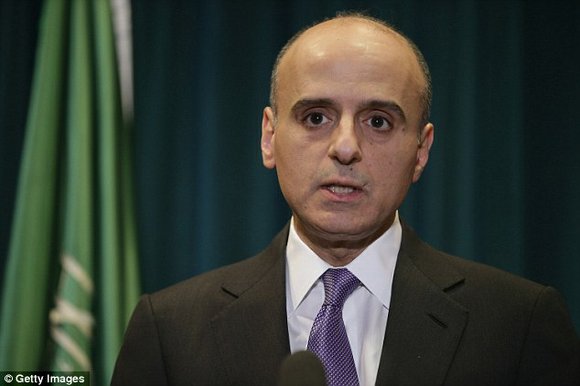 WASHINGTON (CNN) -- The Saudi Ambassador to the United States would not rule out the possibility of the Saudis creating their own nuclear bomb to counterbalance a nuclear-armed Iran in an interview with CNN's Wolf Blitzer on Thursday.

"But the kingdom of Saudi Arabia will take whatever measures are necessary in order to protect its security," he added. "There are two things over which we do not negotiate: Our faith and our security."

Al-Jubeir said, however, the details disclosed by the Obama administration to the Saudis about the developing nuclear deal with Iran were "positive."

"I can't say that we like it, because we don't know the details," he said. "The assurances we have received from the administration have been positive but we want to see the details before we can make a judgment."

The Saudi ambassador said other countries in the Middle East are "concerned" about Iran potentially gaining nuclear weapons, but that the Obama administration has assured them "all paths leading to a nuclear weapon by Iran will be cut off" and there will be "very intrusive inspections" that will prevent such an outcome.

The Saudis, supported by allied forces, launched an air campaign on Thursday against rebel forces in Yemen that Saudis see as aligned with Iran. In an implicit reference to that conflict, which is rapidly escalating into what some see as a proxy war between the Saudis and Iran, Al-Jubeir said his nation is concerned about Iran's "interference in the affairs of other countries in the region."

"We believe Iran's behavior ... is not reassuring to people in the region," he said.