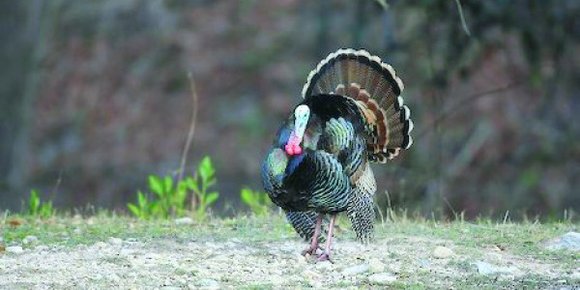 AUSTIN – With a good mixture of mature gobblers and fearless young toms to challenge hunters, this year’s spring turkey season holds plenty of promise, according to the Texas Parks and Wildlife Department.

Spring turkey hunting gets under way this weekend, March 14-15, with the special youth-only weekend season for Rio Grandes in the 54-county South Zone. The general season in the South Zone runs March 21-May 3 and culminates with another youth-only weekend May 9-10. In the 101 counties comprising the North Zone, the youth-only weekend seasons are March 28-29 and May 23-24. The North Zone general season opens April 4and runs through May 17. A special one-gobbler limit season runs April 1-30 in Bastrop, Caldwell, Colorado, Fayette, Jackson, Lavaca, Lee and Milam counties.

Last season, hunters observed good numbers of two-year-old gobblers throughout most of the state’s Rio Grande turkey range. With good carryover of those birds, prospects are bright for calling in some big boss toms this season, says TPWD turkey program leader Jason Hardin.

“Rio hunters should do well this spring,” Hardin predicts. “There will be a good distribution of age classes on gobblers across the Rio Grande turkey range this season. A few jakes were observed across the Rio range last year, so there should be a good number of less wary birds out there.”

Hardin notes that last summer’s rains provided a much-needed bump in turkey production late in the nesting season and hunters can also anticipate seeing a handful of jakes again in the mix this spring.

As for eastern turkey prospects, Hardin indicates growing populations north of U.S. Highway 82 along the Red River from Grayson to Bowie County. “Reports out of the Pineywoods have been mixed and I expect we will see a bump in harvest, but nothing substantial,” he says. “Landowners, managers and hunters who observed eastern turkeys last year will be seeing them again this year.”

Eastern spring turkey hunting in the 28 counties having an open season is April 15-May 14. All eastern turkeys must be reported to TPWD within 24 hours of harvest. A list of check stations can be found online at https://tpwd.texas.gov/huntwild/hunt/season/stations/ .In addition to physical check stations, hunters have the option of reporting harvests online at www.tpwd.texas.gov/turkey/ or on the new My Texas Hunt Harvest app. The app is now available for download for Android devices at Google Play and will be available soon for iOS devices at the App Store. Hunters who use the electronic reporting options will be issued a confirmation number upon completion of the registration process. Hunters still have to tag harvested birds.

The new harvest reporting app can also be used as a tool for voluntarily reporting and tracking harvests of other resident game species, including Rio Grande turkey. With My Texas Hunt Harvest, hunters can log harvested game animals and view harvest history, including dates and locations of every hunt.

For more information go to www.statepoint.net