The Big Secret Behind The Infinity Gauntlet, According To Marvel's Kevin Feige 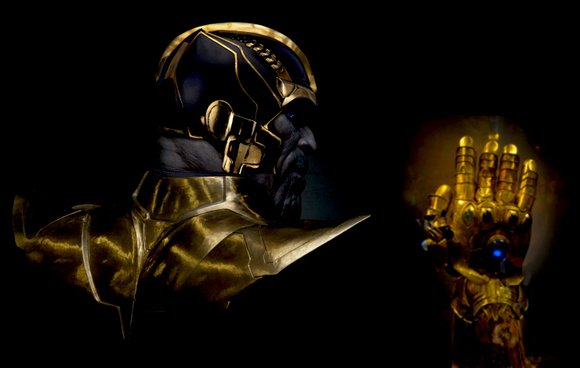 Thanos and the Infinity Gauntlet

SPOILER WARNING: What follows will spoil the mid-credits scene from The Avengers: Age of Ultron. If you haven’t seen the movie yet, and want to go in without knowing about the bonus sequence, please click away to one of our other articles!

In the mid-credits sequence in The Avengers: Age of Ultron, Thanos reaches into a vault and pulls out the famed Infinity Gauntlet... but it's understandable why this may strike the more die-hard fans of the Marvel Cinematic Universe as a bit odd. After all, eagle-eyed viewers first spotted the Infinity Gauntlet within Odin’s Treasure Room in Kenneth Branagh’s Thor, so how could Thanos just have it in his possession? The answer is surprisingly simple, and was actually confirmed by Marvel Studios President Kevin Feige recently when I sat down with him for a one-on-one interview: there are actually two Infinity Gauntlets.

Feige made this fascinating reveal towards the end of the interview, and with The Avengers: Age of Ultron now out in theaters, I can finally write about it! Being one of the die-hard Marvel fans that I mentioned earlier, I asked Feige if the presence of the Infinity Gauntlet in the mid-credits sequence was a rewrite in continuity or something else entirely, and he explained that nothing is being overwritten. Or as he put it,

There are two different gloves. That was not Odin’s vault that you see at the end.

When you think about it, this really does make all kinds of sense. After all, the idea of forging just one cosmic artifact glove is kind of silly when most have two hands, right? So there is a degree of sense in Thanos having his own gauntlet while it’s double continues to rest on Asgard:

For those unaware of exactly what the Infinity Gauntlet is, it’s a glove specifically constructed to hold what are known in the Marvel Cinematic Universe as The Infinity Stones. This includes the Power Stone (the orb from Guardians of the Galaxy); the Space Stone (the Tesseract from Captain America: The First Avenger and The Avengers); the Reality Stone (the Aether from Thor: The Dark World); the Mind Stone (the gem from Loki’s staff in The Avengers and The Avengers: Age of Ultron) and the still-unseen Time Stone and Soul Stone. When all of these stones are put into the Infinity Gauntlet, it gives the wearer the powers of a god. In Marvel Comics, Thanos is the character best known for questing after the stones and the gauntlet, and we will get to see all of that play out in Marvel Studios’ 2018 and 2019 two-parter The Avengers: Infinity War.

Exactly what "two Infinity Gauntlets" means for the future of the Marvel Cinematic Universe is an open-ended question. Does this mean that it would be possible for two people to wear them at the same time, both possessing elements of the aforementioned stone? If it is possible for both gloves to be simultaneously active, what would happen if a person wore both at the same time? Hopefully these are questions that will be answered some time down the line.