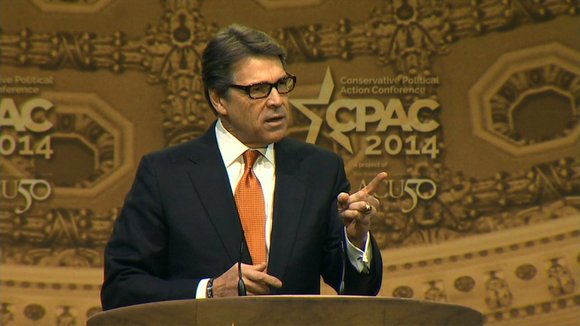 WASHINGTON (CNN) -- Rick Perry is the latest Republican presidential contender to argue that Congress should shut down the Export-Import Bank, saying he's changed his mind about the federal agency he supported as Texas governor.

In a Wall Street Journal op-ed on Tuesday, Perry said the little-known bank -- which has emerged as a litmus test among conservatives who want their party to buck Big Business and allow Ex-Im's charter to expire on June 30 -- is an ideological mark against Republican efforts to reform corporate taxes.

"We can't let Ex-Im get in the way of reforms that would expand opportunity for all Americans," Perry wrote.

The Export-Import Bank, a federal government credit agency founded in 1934, helps U.S. companies finance sales overseas when banks won't support the deals. Its biggest customers are industries like airlines and heavy machinery manufacturers, though small companies make up the vast majority of its client roster.

Other countries -- particularly in Europe and Asia -- have similar institutions, and in some cases they're much larger. That's led the U.S. Chamber of Commerce and the National Association of Manufacturers to argue that the United States would be ceding billions of dollars in exports by allowing its bank's charter to lapse without similarly striking some sort of deal to have other countries abolish theirs as well.

A number of other Republican presidential candidates -- including former Florida Gov. Jeb Bush, Florida Sen. Marco Rubio, Texas Sen. Ted Cruz and Wisconsin Gov. Scott Walker -- have also called for the bank to be shuttered. South Carolina Sen. Lindsey Graham appears to be its lone supporter in the GOP field.

Perry said his original concern that eliminating Ex-Im "would mean unilaterally disarming in a fight that Europe and China intend to win" is why he wrote a letter in June 2014 supporting the bank.

But since then, he said, he's been "deeply disturbed" by recent ethics problems that have struck the bank -- including revelations that several of its employees accepted gifts and kickbacks to help companies that sought the bank's financing.

"It may be that the best way to mend Ex-Im is to end it," Perry wrote.

He added that the bank's aid to specific companies undermines the United States' credibility in a broader debate about taxes.

"And that is why the time has come to end the Export-Import Bank," he wrote. "We can't let Ex-Im get in the way of reforms that would expand opportunity for all Americans."

"When it comes to the livelihoods of Americans, political posturing is simply irresponsible," he said. "The Ex-Im debate comes down to this: if the bank is not reauthorized, people are going to lose their jobs and manufacturers will be hurt. Those who oppose the Ex-Im Bank are willing to cede manufacturing jobs in America to foreign competitors."

Other members of the business community also took shots at Perry, including William Schubert, the head of International Trade & Transportation Inc. and the former chief of the U.S. Maritime Administration under President George W. Bush.

"Shame on Governor Perry for turning his backs on workers in Texas who are finding new growth opportunities abroad to drive growth here at home," he said. "I don't know who the likes of Rick Perry is listening to, but it surely isn't the people of Texas."