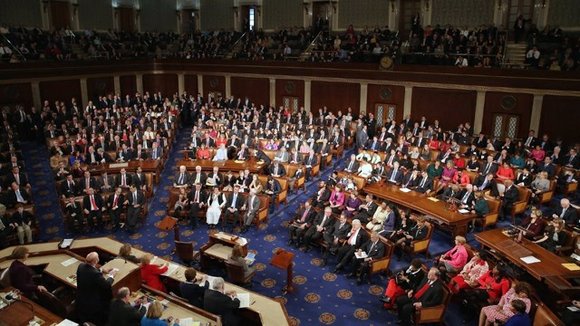 Top House Republican leaders met behind closed doors with several members to discuss various proposals and plan to unveil their legislation on Friday. A vote is targeted for early next week, before House and Senate Republicans head to a joint retreat in Pennsylvania.

WASHINGTON (CNN) -- The Senate on Tuesday passed a Republican-backed budget blueprint that boosts defense spending while cutting $5 trillion in spending, largely on social programs, to balance in a decade.

Lawmakers approved the blueprint on a 51-48 party-line vote.

Republican 2016 presidential contenders were split on the measure, with Sens. Marco Rubio and Lindsey Graham voting in favor, while Rand Paul and Ted Cruz voted against.

Senate Majority Leader Mitch McConnell touted the vote as an example of "sensible" governance from Republicans.

The proposal tightens eligibility rules for food stamps and cuts funding for other social programs, proposing, for instance, $430 billion in savings from Medicare. And it hikes funding for the Pentagon's war fund -- which is outside of the overall budget, and thus isn't subjected to budget caps previously imposed by lawmakers -- by $38 billion.

It also sets up a showdown with President Barack Obama on his signature legislative accomplishment, the health care reform act.

It includes a provision known as "reconciliation" that allows the Senate to pass legislation repealing Obamacare with a simple majority vote, a sweetener for conservatives. Despite the President's vow to veto any legislation to unravel his health care law, congressional Republicans say they intend to move forward with their effort to scrap it.

The proposal is a non-binding blueprint; it simply sets spending outlines for the coming year. Lawmakers will begin the process of nailing down specific spending bills in the coming weeks.