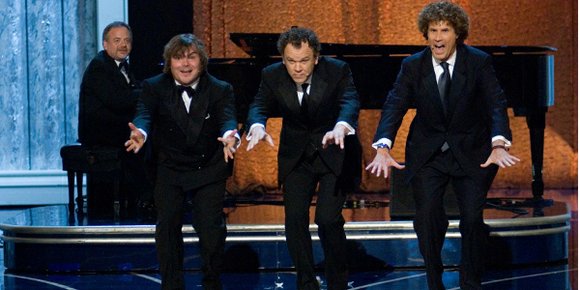 Jack Black has made a name for himself playing hilarious roles on the big screen, along with a few dramatic projects here and there. However, one type of role he hasn’t sunk his teeth into yet is a superhero, but he almost got the chance. Those of you who have followed the development of Green Lantern in film over the years known that the comedy star had been in talks to star in a humorous take on the ring slinger last decade. That film was eventually scrapped, and the hero eventually made his debut in 2011 played by Ryan Reynolds. Now, Black has revealed more about how he got onboard with the project.

While chatting with Yahoo! Movies about his new film The D Train, Black talked about how he almost got to play Hal Jordan on the big screen before Warner Bros decided to go the more serious route. Black said:

There was a really funny script, an awesome script that I wanted to do, by the genius Robert Smigel [Triumph the Insult Comic Dog]… but they didn’t want to pull the trigger. They were making zillions of dollars with all their other superhero movies — they didn’t want to mess with that formula.

Soon after the 2011 Green Lantern film hit theaters, Smigel talked about how his Green Lantern film would have been a much different beast by featuring a lot of goofy jokes. The basic premise would have involved the ring going to the wrong person, where shenanigans would undoubtedly ensued. Smigel also wrote this film with Black in mind, and while Black wasn’t big on the idea at first, after reading the script, he decided he wanted to do it. So if things had gone differently, around the time movies like X-Men: The Last Stand and Spider-Man 3 were coming out, we could have seen Black donning the ring in a wacky adaptation of DC’s Emerald Knight.

While 2011’s Green Lantern had its share of humorous moments, it followed the same serious formula as most superhero movies are using these days. After earning mostly negative reviews and barely making back its budget, Warner Bros scrapped plans to continue the Reynolds-led series in favor of rebooting the character with the advent of the DC Cinematic Universe. The new Green Lantern will headline a new solo film in 2020, and it’s been speculated that he may appear in one of the Justice League films first.

However, Black seems all but certain that he won’t be getting a second chance to play the character, saying "Yeah, they’re not going to call me." That’s probably a safe bet, since a full-on comedy wouldn’t fit within the narrative tone Warner Bros is trying to build with the new DC films. Still, Black wearing that green costume and coming up with bizarre physical constructs using the ring’s power would have been a weird, and possibly hilarious, sight.