An Apology For Shakespeare: Ground-Breaking Book Wakes Readers Up to Knowledge & Wisdom Found in Poetry 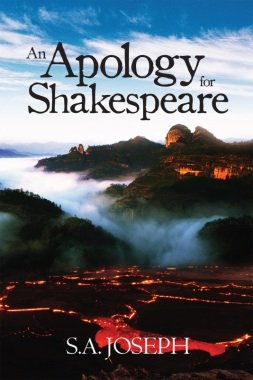 ‘An Apology For Shakespeare’ is available on Amazon.

Bangalore – In the synopsis of his new book, S.A. Joseph poses a pertinent and hugely thought-provoking question; if you suddenly bumped into William Shakespeare, what would you talk about? It doesn’t take more than a few seconds to conclude that most don’t enough about the great master’s work to even be able to hold a basic conversation with him.

To that end, Joseph has written and released ‘An Apology For Shakespeare’ to encourage all to read, embrace and build a passion for poetry; a literary medium containing thousands of years of inspiration. It’s been hundreds of years since someone has defended poetry, and Joseph is living up to the challenge.

An Apology For Shakespeare is a humble attempt to show that there is a need of awareness about Poetry in our life.

Study of poetry and its manifold forms need to be encouraged. It voices against the negative and indifferent attitude to virtues and good qualities. This book aims to create a conscience among the people about the vanishing values and ideals from many of us. The study of classics is significant in this end as they provide much knowledge and wisdom and have grave and serious themes.

If you meet William Shakespeare all of a sudden, unexpectedly, in front of you and he is ready to talk to you, what all topics would be coming up on?

The author addresses William Shakespeare whom he considers to be one of the greatest poet of all time, He seeks help to counter the vices and he expresses his weaknesses to do the same. He tells many topics to the great Master of Arts.

“Poetry is of course still very popular and widely-read, but it’s a format that is certainly dying,” explains Joseph, currently serving as Head Master of a Bangalore school. “I want to empower people to read poetry both old and new, to carefully study its themes and extract wisdom from them that will guide them in life.”

Continuing, “It’s also vital to show Shakespeare off for who he really was – a storyteller of his time who in himself has become timeless. With many of his works being turned into movies, many people have lost touch with who the man really was, as well as his transformational impact on the literary world as a whole.”

‘An Apology For Shakespeare’, from Notion Press, is available now

S. A. JOSEPH was born on 25.05.1971.He was the fifth child of Mr. A. M. JOSEPH and Mrs. V. C. ALEYKUTTY. They are from a lower middle class farmer’s family of PAYYAVOOR village, Cannanore Distt, Kerala state, India. He did his schooling at SACRED HEART HIGH SCHOOL, Payyavoor, Cannanore. He studied his pre degree course at SACRED HEART MOUNT MONASTERY, Kottayam, Kerala. He won his graduation studies from PAYYANNUR COLLEGE, Payyannur, Cannanore. He is a post graduate in English Literature with a Teaching Degree in Education. He is presently working as the Head Master of a school in Bangalore. He is married to Mrs. MINIMOL K. I and blessed with two children, Master MILAN SHAJI and Miss SONAL SHAJI.