5 Things to Know for Your New Day -- Monday, November 2 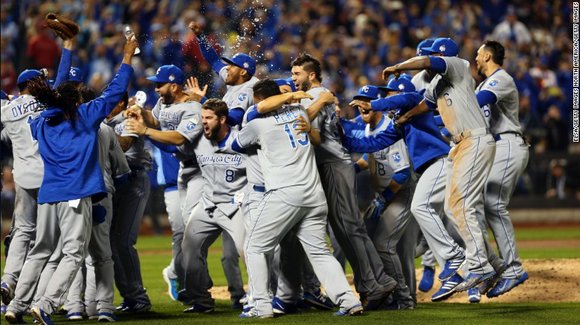 (CNN) -- The Kansas City Royals reign supreme in the World Series. Searchers may have found the wreckage of a missing cargo ship with 33 people on board. And one of America's most famous actor-politicians has died.

It's Monday, and here are five things to know for your new day:

A thrilling finish: It may have taken two days, but the Kansas City Royals beat the New York Mets in Game 5 of the World Series to clinch the title. Fans collectively screamed when Eric Hosmer made a gutsy dash home to tie the game in the ninth inning. The victory marks Kansas City's first championship in 30 years.

Happy anniversary, ISS: Today marks the 15th anniversary of humans docked at the International Space Station. All six astronauts currently living there will answer questions Monday morning from Earthlings down below.

A highly unusual crash: A Russian passenger jet broke into pieces in midair before crashing in Egypt's Sinai Peninsula on Saturday, killing all 224 people on board. It's still not clear why the plane disintegrated mid-flight; ISIS-affiliated militants apparently made a claim of responsibility for bringing down the jet, but Egyptian and Russian officials dismissed it.

33 people still missing: Almost a month after the cargo ship El Faro disappeared, a U.S. Navy search team has found wreckage from a vessel believed to be El Faro -- but the wreckage is about 3 miles underwater. Searchers are hoping a remotely operated sub will provide more answers. Meanwhile, the ship's owners have filed a lawsuit to try to block legal action by the victims' families.

From Senate to 'Law & Order': Famed actor and former Sen. Fred Thompson has died, his family said Sunday. He was 73. As a Tennessee Republican, Thompson won a special election in 1994 to fill Al Gore's vacate U.S. Senate seat. As an actor, he appeared in "Law & Order," "Die Hard 2" and "In the Line of Fire."