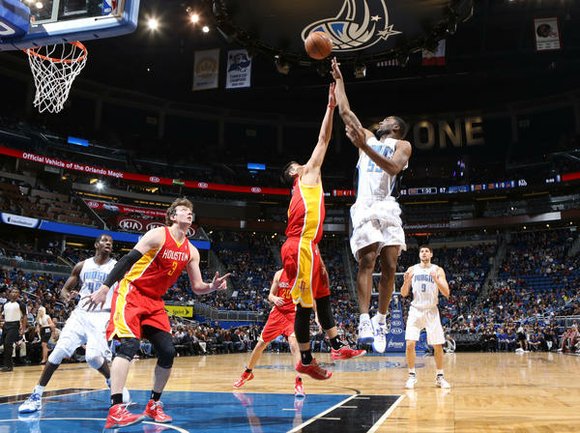 HOUSTON (AP) -- James Harden didn't let another tough shooting night keep him from coming through when the Houston Rockets needed him most.

Harden scored 28 points, including seven in overtime, to help the Rockets outlast the Orlando Magic for a 119-114 victory on Wednesday night.

It was a wild, back-and-forth game that was tied 18 times and featured 22 lead changes. Harden was 6 of 22, his fourth game this season where he shot less than 30 percent.

-- Scott Skiles on the loss

Dwight Howard and Harden made back-to-back layups to get things going for Houston in overtime and make it 114-110. Evan Fournier made a basket for Orlando before a three-point play by Harden pushed the lead to 117-112.

Harden talked about the key to his success in overtime.

"Trusting in myself and trusting in my teammates," Harden said. "Making the extra pass, having confidence in the shot and just shooting it."

Shabazz Napier cut the lead to 117-114 with a jump shot with 2 1/2 minutes left, but the Magic didn't score after that and Harden made a pair of free throws with 0.9 seconds left to secure the victory.

"We should have won the game," Fournier said. "We have to get mentally stronger and have to close out a game like that."

It was Houston's second straight win after a 0-3 start and the Magic's fourth loss of five points or less this season, and second in overtime.

Howard is still working his way back into game shape after missing all but one preseason game with a stiff back.

Harden crashed hard to the court when he was fouled by Fournier with about 8 minutes remaining. He remained on the floor for a couple of minutes before slowing getting to his feet and making one of two free throws that put Houston up 98-97.

Orlando: Gordon finished with 19 points and eight rebounds. ... Victor Oladipo had 18 points and seven rebounds. ... Orlando scored 58 points in the paint. ... Nikola Vucevic sprained his knee and will be re-evaluated on Thursday.