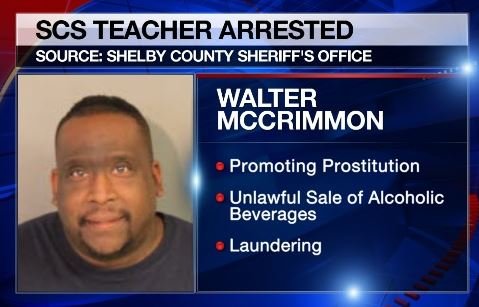 Memphis police have reported that a Shelby County school teacher have been charged in connection with an illegal brothel.

Walter McCrimmon, 44, has been charged with eight counts of promoting prostitution, unlawful sale of alcoholic beverages and money laundering. He has been released on $50,000 bond.

McCrimmon, a teacher at Raleigh-Egypt High School, has been suspended without pay, Shelby County Schools said in a statement.

“We are very concerned about the severity of these allegations. At this point, the teacher has been suspended without pay.”

According to police, this investigation began in August after they received tips about illegal activity at Walt’s Place, 3572 Commerce.

For three months, undercover officers visited the club and found that patrons paid a $20 “membership fee” for events that included exotic dancers simulating and performing sex acts. The club held no compensated dance permit. There was also a private VIP room where patrons could buy time for additional dances or sex acts.

Vice officers also observed a bartender selling alcohol, though the club has no liquor license or beer permit.

Police said their officers made eight prostitution deals, including some directly from McCrimmon. According to an affidavit, McCrimmon told undercover officers that the price for sex was $50.

On Saturday, police raided the club and shut it down. Environmental Court Judge Larry Potter will hold a hearing on a nuisance petition regarding the club Wednesday morning.

McCrimmon has no other serious criminal offenses on his record.

For mor information go to http://www.blackamericaweb.com