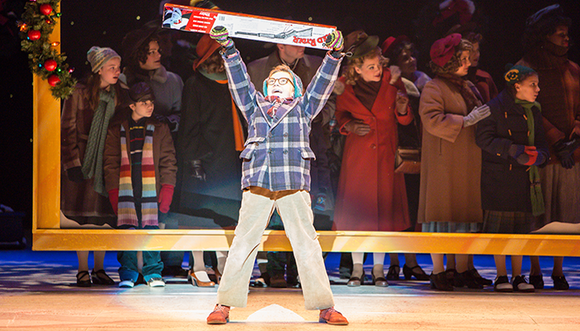 HOUSTON (November 25, 2015) – Theatre Under The Stars (TUTS) welcomes the clever adaptation of the 1983 comedy classic A Christmas Story – The Musical to the stage from December 8 - 20, 2015 in Sarofim Hall at the Hobby Center for the Performing Arts. A beloved tradition, TUTS’ annual holiday main-stage production is one of the most highly anticipated shows of the season.

TUTS will offer several special events in conjunction with the production for unforgettable holiday experiences:

· METRO Rail Character Ride: Ralphie and his gang ride the rails in costume from 11:00A – 1:00P, Friday, December 4th

· Kids’ Night: TUTS presents a number of pre-show children’s activities in theme with A Christmas Story, on Wednesday, December 9th. Theatregoers are also encouraged to bring an (unwrapped) gift to benefit children as part of Big Brothers Big Sisters of Greater Houston

· “HOL-ALE-DAY” Experience at Karbach Brewery: On Thursday, December 17th, enjoy a couple of Houston’s finest craft beers (including the holiday exclusive Yule Shoot Your Eye Out Black Ale), light bites, A Christmas Story trivia, along with photo opportunities and two actual Red Ryder BB target shoots (yes, this is entirely safe and legal). Includes round-trip transport and tickets to the evening performance of A Christmas Story.

TUTS' production of A Christmas Story is made possible by the generosity of Ballard Exploration Company, Inc.

TUTS’ 2015/16 season is generously sponsored by CHI St. Luke’s Health. For all shows, air transportation is provided by United Airlines, the official airline of TUTS. Media sponsors include ABC-13 and Houston Chronicle. Season support is funded in part by grants from the City of Houston through the Theater District Association, the National Endowment for the Arts, and the Texas Commission on the Arts.