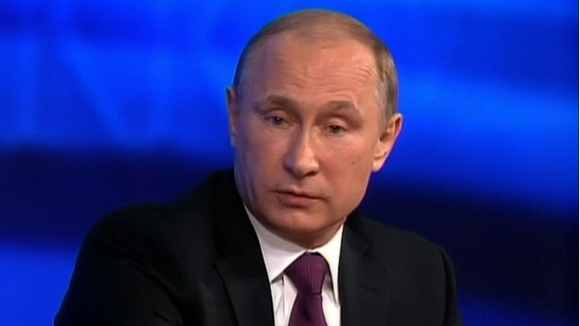 In the final question of the more than three-hour conference, Putin was asked whether he took personal responsibility for Russia's economic issues and if he would stand in the 2018 presidential elections.

The White House downplayed Russia's decision to launch the strikes without coordinating with the United States, and the State Department said ahead of the strikes that Russian involvement in Syria could be an opportunity. But the Pentagon slammed the move and suggested Moscow's backing for close ally Syrian President Bashar al-Assad -- who appears to be losing his grip on power -- will only inflame the war there and could set back the effort to drive out ISIS.

The differences raise questions about the precise nature of the U.S. strategy for countering ISIS in Syria, with Republicans criticizing the White House for ceding the ground to Russia even as some observers suggested that the United States was letting Russian President Vladimir Putin gain a toehold in order to ensnare him rather than American troops in the bloody conflict.

Russia gave the United States just one hour heads-up that it would be launching airstrikes in the western Syrian city of Homs on Wednesday morning and told U.S. aircraft -- there to battle ISIS -- that they needed to leave Syrian airspace.

The United States declined to do so, but having both air forces operating in the country raises the specter of military mishaps between the two powers. The United States had anticipated holding conversations with the Russian military on "deconfliction," so that there wouldn't be inadvertent overlap, but that expectation wasn't met -- though it appears military-to-military talks will be held as soon as Thursday.

Similarly, President Barack Obama received clarifications from Putin in a meeting Monday that the Russian strikes would target ISIS, as the U.S. desires, rather than go after the opposition forces fighting major Russian ally al-Assad. But that expectation also wasn't borne out.

Defense Secretary Ashton Carter said Wednesday that the Russian attacks, which the Kremlin said were meant to target terrorists, didn't appear to hit targets under the control of ISIS, which operates in the north and east of the country.

'Gasoline on the fire'

Carter told reporters at the Pentagon Wednesday the Russian airstrikes were tantamount to "throwing gasoline on the fire" in Syria and that the moves, without a parallel effort to replace Syrian President Bashar al-Assad, could "inflame the civil war in Syria."

But the White House downplayed the Russian move and its dangers.

"I think the Russians have made clear that they're not interested in provoking a conflict," White House press secretary Josh Earnest said. "Their actions thus far indicate that that's what they believe."

And unlike Carter, who described the Russian means of informing the U.S. of its airstrikes launch as "unprofessional," Earnest shrugged off any breach in procedure, saying the level of "upset and surprise" at the White House over Russia's moves was "quite low" given Moscow's consistent support for al-Assad.

Officials at the White House said they were waiting to see how Russia's moves pan out in the coming days and were confident talks between military officials from the two countries would help avoid midair conflicts -- even as some military analysts questioned the effectiveness of those potential talks.

"How do you coordinate at a very tactical level with the Russians with whom we have no experience at all?" wondered former Maj. Gen. Spider Marks, a CNN military analyst.

"We have had, for years, hot lines and red lines at very senior levels," he said. "But I'm talking about ground controllers and pilots and aircraft that are moving at the speed of sound, in excess of that, and potentially going after similar targets. We don't have any experience with that."

And some longtime critics of U.S. policy in Syria charged the latest Russian activity demonstrated the shortcomings of the administration's approach.

The Russian strikes are "the inevitable consequence of hollow words, red lines crossed, tarnished moral influence, leading from behind and a total lack of American leadership," Senate Armed Services Committee Chairman John McCain, an Arizona Republican, said on the floor of the Senate.

And Rep. Mac Thornberry, McCain's counterpart on the House Armed Services Committee, echoed his comments on CNN: "What it looks like to me is the administration is willing to just run out the clock. And even though they've got a year plus left, they don't want to engage."

"They just will sit back and let whatever happens happen," he continued. "The problem is, the world is spiraling increasingly out of control, and it doesn't look like this White House is even wanting to do something about it."

Indeed, many of the critics gripe that the White House -- frustrated by the lack of progress in Syria and seemingly unable to devise an effective solution -- is willingly allowing Putin to insert himself into the mess with the hopes he can stem the bloodshed.

Earnest replied by asserting Moscow's airstrikes were an attempt to bolster al-Assad, rather than a play to fill a Middle Eastern power vacuum.

"Russia has treated Syria as a client state for quite some time now," he said. "Five years ago, that client state was pretty stable, and right now, it's a client state that is in utter chaos, where the leader that they have propped up for years is losing his grip on power. And I think that's a pretty clear indication that Russia is not flexing its muscles when it comes to Syria."

But some analysts suggested that Russia may already have an upper hand in seizing the initiative in Syria.

"Regardless of how much complaining we do about Russian intervention, or how skeptical we are that they can actually succeed, the fact of the matter is that they have taken over the facts on the ground," said Vali Nasr, dean of the School of Advanced International Studies at Johns Hopkins.

"They have been much more aggressive in talking to everybody and everybody has been willing to talk to them, whereas in the case of the U.S., we have been talking about doing diplomacy but our diplomacy is not actually in practice."

The Russians made an agreement with Syria, Iran and Iraq to share intelligence and held its own U.N. meeting on countering extremism Wednesday after shunning Obama's summit on the same topic Tuesday.

But elsewhere in the administration, the prospect that Russia's strategy might backfire was implicitly seen as a possible opening.

Asked by CNN's Elise Labott ahead of the airstrikes whether Putin was creating new realities on the ground in Syria that are boxing in the United States, Secretary of State John Kerry strongly disagreed.

"I don't see how it boxes us in the least, in fact, I think it opens up more options. But I think it makes life very complicated for Putin himself," he said. "If he's going to side with Assad and with Iran and Hezbollah, he's going to have a very serious problem with the Sunni countries in the region. And that means that he could even become a target for those Sunni jihadis."