Company: El Faro Skipper Had Plan to Deal With Storm 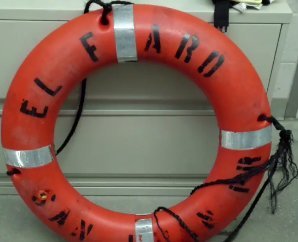 (CNN) -- The owners of a cargo ship presumed to have sunk insist that the captain of El Faro had a "sound plan" to avoid Hurricane Joaquin, but that the ship's main propulsion failed, stranding the crew in the path of the storm.

The unidentified captain had real-time weather information when he left the port in Jacksonville and reported favorable conditions at the outset, Tote Services President Phil Greene told reporters.

Given the weather system, the captain's "plan was a sound plan that would have enabled him to clearly pass around the storm with a margin of comfort that was adequate in his professional opinion," Greene said on Monday night.

Still, the question that came up over and over again at the news conference at which Tote Incorporated President and CEO Anthony Chiarello, Tote Maritime Puerto Rico President Tim Nolan and Greene attended was a version of this: Knowing that a potential hurricane was brewing, why was El Faro allowed to go ahead with its scheduled route?

The U.S. Coast Guard has concluded that the ship, which was carrying 28 Americans and five Polish nationals, sank last week. It was headed from Jacksonville, Florida, to San Juan, Puerto Rico, when it disappeared near the Bahamas.

The trio of managers said they put their trust in the company's captains to be the decision-makers, and that up until El Faro lost its propulsion, the reports were not alarming.

"When the ship sailed on Tuesday evening, the storm was nowhere near what it was at the time that the vessel became disabled," Chiarello said.

The captain sent an email to headquarters last Wednesday morning saying he was aware of the "weather condition" -- the increasingly powerful Hurricane Joaquin -- and that he was monitoring it's track, though conditions where the ship was "looked very favorable," Greene said.

The concern that the captain had about the weather was about the return trip from Puerto Rico to Florida, he said.

"They were disabled right by the eye of Hurricane Joaquin," Fedor said Tuesday. "If they were able to abandon ship and put on their survival suits, they would have been abandoning ship into that Category 4 hurricane. So you're talking about 140-mile-an-hour winds, 50-foot seas, zero visibility. It's a very dire situation, a very challenging situation even for the most experienced mariner."

What happened to ship's propulsion?

The captain informed his company that El Faro was disabled, but the cause remains unclear.

"The captain did not explain in his communication why he had lost propulsion," Greene said. "He indicated that he had had a navigational incident."

The captain had said the ship was listing, or leaning, 15 degrees, but it was unclear whether that was due to the wind or environmental conditions, and what impact this may have had on the propulsion system.

"So, he did not say why the vessel became disabled in terms of the engineering problem of the propulsion system," Greene said.

It was also unknown how much time lapsed between the time the propulsion failed and the time the captain reported the problem to his bosses.

"Based on the evaluating the position of the ship when the captain reported (the propulsion failure), he was in the path of the storm," Greene said.

He said: "I think what is regrettable on this is the fact that the vessel did become disabled in the path of the storm, and that is what (ultimately) led to the tragedy."

Investigators with the National Transportation Safety Board arrived in Jacksonville on Tuesday.

"Our mission is to understand not just what happened, but why it happened, and to issue recommendations and findings to prevent this from happening again," board Vice Chairman Bella Dinh-Zarr told reporters.

"We will be looking at everything. So we leave no stone unturned in our investigation, in our analysis," she said.

Lots of debris, but no survivors so far

The massive search in the Caribbean Sea has yielded a 225-square-mile debris field, but no ship and no survivors.

Family members told CNN affiliate WFOX they questioned why the ship sailed into what was then a tropical storm.

That morning, Joaquin was forecast to be a tropical storm with possible paths that would not interfere with El Faro's route. Near midday, the forecast was still for a tropical storm, but moving closer to the ship's path.

At 5 p.m., the forecast showed that Joaquin would reach hurricane strength and that the ship's path would take it straight into the track of the storm.

El Faro left the port of Jacksonville about 8 p.m. Tuesday, according to Marinetraffic.com.

Fedor said the disappearance of a 790-foot ship is unusual.

But "no matter how big the ship is, when you are disabled, and you're at sea, and you're in the middle of a storm ... the size and strength of that storm is just enough to overcome just about anything."