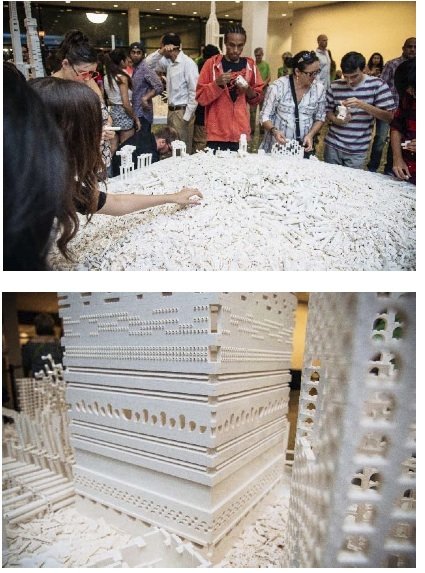 Overview: This past weekend, the 5,000 guests who attended the Mixed Media Block Party at the Museum of Fine Arts, Houston, were among the first to help create a monumental work of art at the Museum. The collectivity project is an installation of more than 580,000 white LEGO® bricks that allows the public to create an imaginary cityscape. Visitors to the Museum are invited to build and rebuild the structures; over time, a collective creation takes form. The project will remain in the lobby of the Caroline Wiess Law Building until January 31, 2016.

The interactive installation was first conceived by Danish-Icelandic artist Olafur Eliasson in 2005, and has previously been installed in public squares in Tirana, Albania (2005), Oslo, Norway (2006), and Copenhagen, Denmark (2008). It was most recently on view at the High Line in New York (2015).

The Houston presentation of The collectivity project coincides with the groundbreaking of the Museum’s Fayez S. Sarofim Campus and the new Glassell School of Art. This human-scale artwork invites Museum visitors to engage in new ways of thinking about our city’s built environment and our relationship to social spaces.

In the days before the opening of the project, students from the Rice School of Architecture and Texas Southern University were invited to collaborate by building the project’s initial structures.