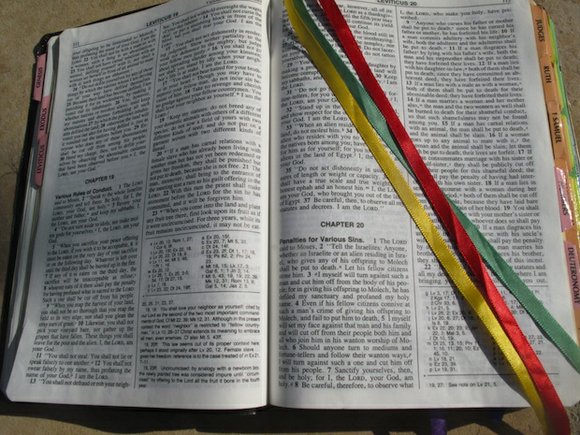 (CNN) -- This is week 21 of an ongoing series: A Catholic Reads the Bible. Read Week One, Week Two and Week Three.

In recent weeks in my Bible reading, I have had to go backwards to go forwards.

The story of King Uzziah in the Second Book of Chronicles got me thinking about faith. But I had this feeling that I had read about him before.

Uzziah was afflicted with leprosy because he ventured into the temple and took the place of the priests to burn incense and offer sacrifice.

When the priests try to stop him, Uzziah gets angry. But, as his wrath bellows forth, "leprosy broke out on his forehead."

God used leprosy to punish someone?

That would be my worst nightmare.

But the familiarity had me flipping through my notes.

I must confess, that my huge (and irrational) fear of the disease is why it was so memorable.

As a child, I was quite the hypochondriac. When I watched the movie "Ben Hur" with my grandparents, I was convinced that I was going to be afflicted with leprosy.

I am not sure how living in Vermont that would have happened, but the fear was real for me.

I went back through my notes and couldn't find a reference to Uzziah, just the disease.

With a little online research, I read that Uzziah is actually named Azariah in the Book of Kings.

Kings gives short shrift to the story. You get no background that Uzziah/Azariah was a good king who then did something bad. Rather, Uzziah/Azariah is just one short portion of a chapter.

I am happy that the "Chronicler" added more into the story. I should probably retract my "Pete/Repeat" reference from previous weeks, because this time it benefited me. And I appreciate it.

While I read the Bible each week, I take notes in a journal. As I read the Chronicles passage about Uzziah, I wrote that it would be so much easier if God showed his disapproval with an immediate reaction.

Of course, that is the easy way out. I am not endorsing leprosy on the forehead, but it would be helpful to get a slight nudge.

And reading this a second time was helpful to me. I was proud I remembered -- I had read this before. But, also, I meditated on it.

While, I may never have read the Bible before, I can see why people study it in groups and even re-read it multiple times: You take away new lessons.

And without a leprosy lesion, you have to trust in your faith. Thank you Uzziah/Azariah.

And take it from me, don't google leprosy.