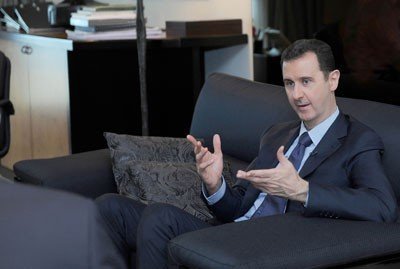 (CNN) -- Embattled Syrian president Bashar al-Assad has flown to Moscow for talks with Russian President Vladimir Putin, who is now his chief sponsor.

Peskov said the talks concerned the fight against "terrorist extremist groups," a phrase the Assad regime regularly uses to describe all elements of the disparate opposition.

Syria has been embroiled in a brutal civil war for four and a half years. The Assad regime has lost control of broad swathes of the country to opponents that include moderate forces as well as the extremist group ISIS. His position has at times seemed in grave danger.

And this is believed to have been the first time he has left the country since the civil war began in March 2011.

But Russia has come to his rescue. On September 30, the Russian Air Force began pounding Assad's opponents with airstrikes. The Kremlin initially said the strikes were against ISIS. But it has since acknowledged that it is intent on shoring up the Assad regime.

Millions have fled their homes

The Kremlin said Assad thanked Russia for the assistance.

"I want to express our tremendous gratitude to the Russian leadership and people for the help they are providing Syria," Assad said, according to the Kremlin. "Thank you for supporting Syria's unity and independence."

Were it not for Russian actions, Assad said, events in Syria would have taken "an even more tragic turn," and terrorism in the region would have made even greater gains.

Putin, too, cast Russian actions as a fight against terrorism.

"The Syrian people have been practically alone in putting up resistance and fighting these international terrorists for several years now," Putin said.

But he said that lately there have been "some major positive results."

Canada to withdraw from anti-ISIS campaign

Meanwhile, the international coalition fighting ISIS had a bit of bad news.

Canada's new leader-in-waiting said he intends to honor his campaign promise to pull the country out of the U.S.-led bombing campaign against ISIS militants in Syria and Iraq.

Justin Trudeau, who led the Liberal Party to victory in elections Monday, said he had already told U.S. President Barack Obama of his plans.

"He understands the commitments I've made around ending the combat mission," Trudeau told reporters Tuesday, without giving a time frame for when Canada's airstrikes would stop.

Trudeau is expected to take office in the coming weeks, replacing Conservative Prime Minister Stephen Harper, who sent Canadian warplanes to carry out airstrikes against ISIS.

The humanitarian toll of the Syrian Civil War has been almost beyond comprehension.

"Over 200,000 lives have been lost since the conflict in Syria began four years ago," the human rights group Amnesty International says on its website . "A staggering 11 million people have been forced to flee their homes and three million children are no longer in school."

In an interview on CNN, Syrian aid worker Zaidoun al-Zoabi broke down in tears as he described the effort to help those in need.